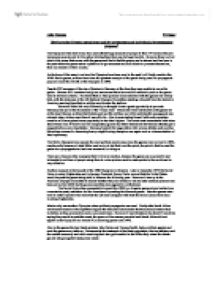 How have the Olympic games been used by governments and individuals for propaganda purposes?

Luke Vaggers PE Essay How have the Olympic games been used by governments and individuals for propaganda purposes? The Olympics when held every four years attract huge amounts of people to their TV screens they are immensely popular and for the nation holding them there can be huge benefits. However there is a bad side to this power that comes with the games and that is that the power can be abused and has been in the past where the games act as a platform for governments and individuals to promote themselves, their movements or their country. As the base of this essay is on how the Olympics have been used in the past I will firstly mention the 1936- Berlin games, as these have been the greatest example of the games being used for propaganda purposes since the re-birth of the Olympics in 1896. Despite IOC concerns of the rise of Nazism in Germany at the time they were unable to move the games. ...read more.

The Berlin Olympics have caused the most political controversy since the games were revived in 1896, maybe partly because of what Hitler went on to do but that is not the point, the point is that he used the games as a propaganda tool and was successful in doing so. There are of course other examples that I will now mention, because the games are so powerful and influential to millions of people using them to voice opinions and to make points to the world can be very effective. Another example is the boycott of the 1980 Olympics in Moscow. Late in December 1979 the Soviet Union invaded Afghanistan and in January President Jimmy Carter warned that the United States would boycott the games being held in Moscow the following year. However it was up to the American Olympic committee to decide whether they sent a team or not and after extreme pressure had been put on the USOC by the government they duly agreed to a withdrawal. ...read more.

When these governments and individuals make these points they are not making the points to the crowd or just their country it is to the world and that is why it is such an effective way to use propaganda. Supposedly Los Angeles was to be the last Olympics where a boycott would take place, however I doubt this to be the case because as long as the games wield the power they have and the ability to influence millions all over the world, points of view and propaganda statements could still be made very effectively. The abuse of the Olympic ideal by leaders and individuals is not looked upon well, at one time they thought the Olympic movement would break down because of it, fortunately the number of boycotts have decreased greatly over the last 20 years. Although the corruption has increased due to the huge amounts money involved these days. The games do not run without fault but something on this scale is bound to have its problems we can only hope they do not hinder the games greatly in the future. ...read more.