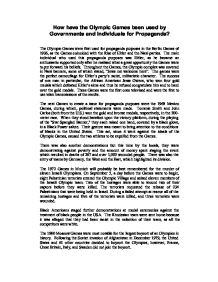 How have the Olympic Games been used by Governments and Individuals for Propaganda?

How have the Olympic Games been used by Governments and Individuals for Propaganda? The Olympic Games were first used for propaganda purposes in the Berlin Games of 1936, as the Games coincided with the Rise of Hitler and the Nazi parties. The main individual who used this propaganda purposes was Hitler, as he became an enthusiastic supported only after he realised what a great opportunity the Games were to put forward his beliefs. Throughout the Games, the Olympic complex was covered in Nazi banners, some of which stated, "Jews not welcome here". The games were the perfect camouflage for Hitler's party's racist, militaristic character. The success of one man in particular, the African American Jesse Owens, who won four gold medals which defeated Hitler's aims and thus he refused congratulate him and to hand over the gold medals. ...read more.

This act, since it went against the ideals of the Olympic Games, caused the two athletes to be expelled from the Games. There was also another demonstrations but this time by the locals, they were demonstrating against poverty and the amount of money spent staging the event which resulted in deaths of 267 and over 1,000 wounded people. There was also the entry of teams by Germany, the West and the East, which highlighted its division. The 1972 Games in Munich will probably be best remembered for the murder of eleven Israeli Olympians. On September 5, a day before the Games were to begin, eight Palestinian terrorists entered the Olympic Village and seized eleven members of the Israeli Olympic team. ...read more.

The 1984 Olympic Games were held in Los Angeles, USA. This was the year when the Soviets lead a 'tit-for-tat' boycott, in retaliation for the U.S.-led boycott of the 1980 Games. A boycott made easy due to the poor security measures, put into place by the Americans. The American anti-soviet groups had made threats and the Soviet Union were concerned about their teams safety. 13 Communist allies including the Soviet Union, East Germany, and Cuba, stayed at home. Also in this year China competed for the first time since 1932. The 1988 Games were held in Seoul in South Korea. This disgusted the North Koreans, as they had not been considered a co-host of the Seoul Olympic Games, thus boycotted the Games. Only Ethiopia and Cuba joined North Korea's boycott; thus the 1988 Olympics turned out to be a very large, exciting, and competitive event. ...read more.