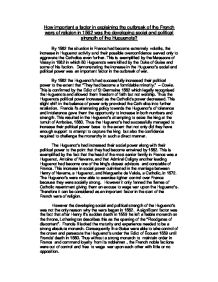 How important a factor in explaining the outbreak of the French wars of religion in 1562 was the developing social and political strength of the Huguenots?

How important a factor in explaining the outbreak of the French wars of religion in 1562 was the developing social and political strength of the Huguenots? By 1562 the situation in France had become extremely volatile, the increase in Huguenot activity and their possible overconfidence served only to aggravate the Catholics even further. This is exemplified by the Massacre of Vassy in 1562 in which 50 Huguenots were killed by the Duke of Guise and some of his faction. Demonstrating the increase in the Huguenot's social and political power was an important factor in the outbreak of war. By 1562 the Huguenot's had successfully increased their political power to the extent that "They had become a formidable minority." - Cowie. This is confirmed by the Edict of St Germaine 1562 which legally recognised the Huguenots and allowed them freedom of faith but not worship. Thus the Huguenots political power increased as the Catholic's power decreased. This slight shift in the balance of power only provoked the Catholics into further retaliation. Francis I's alternating policy towards the Huguenot's of tolerance and intolerance gave them the opportunity to increase in both numbers and strength. This resulted in the Huguenot's attempting to seize the king at the tumult of Amboise, 1560. ...read more.

By 1562 France was in an economic depression due to the cost of the lengthy Habsburg-Valois conflict and inflation. The French crown had a debt of 40 million livres with only a 12 million livres per year income. This was in part due to its expensive foreign policy but also because of its "policy of magnificence" which only helped to increase the debt burden. Thus the crown was unstable it was not able to financially sustain the country's law and order, hence the outbreak of war in 1562. With the end of the Habsburg- Valois conflict came an increase in the rate of unemployment due to the number of soldiers who had no skills to offer employers because, in most cases, they had fought in the wars for many years. To avoid starvation, following a series of bad harvests, many of these soldiers joined one of the three noble factions: Guise, Montmorency or Bourbon. The noble factions now had an army behind them and so had more power to challenge each other with. Therefore the economic depression was a very important factor in the outbreak of war in 1562 because the soldiers were desperate for war so that they could earn enough money to survive. ...read more.

Vassy, 1562, was the final factor, both sides wanted war. The Huguenot's were incensed by the massacre because the edict of January had not been confirmed by parliament till after the massacre, consequently there was an issue of legality, was it murder or punishment? The Huguenot's wanted vengeance for the massacre; this is exemplified by Cond� taking Orleans in august 1562. This was not the first time that the Huguenot's and Catholic's had clashed but it was the first time that the leader of the faction had participated in the blood shed. This is exemplified by the fact that when they returned from Vassy the duke and his entourage were hailed as the saviours of the Catholic faith. However the duke's blatant arrogance instigated the war between the two religions. In conclusion the social and political development of the Huguenot's allowed them not only to become a serious threat to the insecure crown but to Catholic supremacy in France, to the extent that in 1589 Henry of Navarre was crowned king as a known Huguenot. However this was not the most important factor in explaining the outbreak of war in 1562, but rather the presence of the noble factions and their determination to win religious and political domination of France at what ever cost. ...read more.