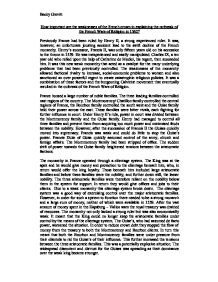 How important are the weaknesses of the French crown in explaining the outbreak of the French Wars of Religion in 1562? Previously France had been ruled by Henry II, a strong experienced ruler. It was, however, an unfortunate jousting accident lead to the swift decline of the French monarchy. Henry's successor, Francis II, was only fifteen years old on his accession to the throne in 1559. He was inexperienced and easily manipulated. Charles IX, a ten year old who relied upon the help of Catherine de Medici, his regent, then succeeded him. It was this new weak monarchy that acted as a catalyst for the many underlying problems that had been previously controlled. The weaknesses of the monarchy allowed factional rivalry to increase, social-economic problems to worsen and also sanctioned an over powerful regent to create catastrophic religious policies. It was a combination of these factors and the burgeoning Calvinist movement that eventually resulted in the outbreak of the French Wars of Religion. France housed a large number of noble families. The three leading families controlled vast regions of the country. The Montmorency/ Chatillon family controlled the central regions of France, the Bourbon family controlled the south west and the Guise family held their power across the east. ...read more.

Charles IX, Francis's ten year old brother assumed the throne. He relied on the help of him mother, Catherine de Medici who acted as regent. As soon as Catherine had assumed power the Guises were thrown out from office and Anthony of Navarre was given the title of co regent. The Chatillon brothers the Montmorency and Bourbon family had now gained power in court once more. This drastic shift in power caused worsened the rivalry between the Guises and the other aristocratic families. It was the weak monarchy that not only allowed the feuding factions to become out of control but also acted to worsen the declining relationship between the aristocracies. During the reign of Henry II Calvinists were tried for heresy, yet, in spite of harsh punishments Calvinism continued to flourish. By 1560 Calvinism was thriving, with religious colonies, provincial synods and a widespread Calvinist population across France. Influence from foreign Calvinist missionaries greatly aided this Protestant development as they converted many people including nobles who were attracted to the political benefits from the religion. The monarchy aided the development and spread of Calvinism as well as worsening the conflict between the two feuding religious groups. Catherine de Medici proceeded to create disastrous religious policies that worsened the situation between the Protestants and Catholics living within France. ...read more.

This isolated event became the final trigger for war and provoked retaliation reactions from the opposing factions. It is evident that it was a combination of factors that lead to the outbreak of the French Wars of Religion in 1562. It was the physical and economical weaknesses of the monarchy that allowed these factors to develop and worsen. The death of Henry II left a political void and both succeeding Kings were easily dominated, they both lacked moral fibre and maturity to be affective rulers and allowed underlying problems to escalate. The political machinations of the feuding factions eventually became entangled with the religious struggle. The lack of crown control over these factions allowed further conflicts to develop as the families fought for power. There were however certain factors that further contributed to the outbreak of war. Foreign influence in the form of Calvinism missionaries significantly increased the number of Huguenots and worsened the heated situation between the Catholics and Huguenots in France. In addition the Triumvirate received financial backing from Philip II of Spain who encouraged the Catholic faction to use violence. It is evident that the lack of monarchical power aided the development of factional and religious rivalry combined with external foreign influence and the spread of Calvinism to eventually result in the outbreak of several religious wars that lasted for approximately ten years of Charles IX's reign. Becky Grevitt ...read more.