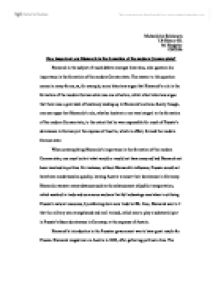 How important was Bismarck in the formation of the modern German state? Bismarck is the subject of much debate amongst historians, who question his importance in

Also, Bismarck saw to it that the military was strengthened and well trained, which was to play a substantial part in Prussia's future dominance in Germany, at the expense of Austria. Bismarck's introduction to the Prussian government was to have great results for Prussia. Bismarck waged war on Austria in 1866, after gathering political allies. The resulting war lasted only seven weeks and Austria was defeated. Prussia had mobilised quickly, had superior weaponry and good railways with which to rush troops to the frontier. Prussia's alliance with Italy forced Austria to fight on two fronts. Austria, on the other hand, had been completely isolated and could look nowhere for support. As a result of the war, the Treaty of Prague was signed with Austria in August 1866, and Bismarck was extremely lenient in his terms. ...read more.

Bismarck's motive for waging war on France was to subdue France so that she would not have any incentive to claim land gained by Prussia. Thus, Bismarck played a vital part in asserting Prussian dominance in Germany, at the expense of Austria as well as Prussia's allies. Without the participation of Bismarck, Prussia would not have been strengthened both economically and militarily to the extent that she could defeat Austria and claim her position as the dominant of the two largest German states. Also, Bismarck gathered allies in his campaign against Austria which ultimately led to a Prussian victory and the formation of the modern German state. Due to the Franco-Prussian war, Bismarck's cancellation of his ally-relationship with France, albeit unethical, was completely necessary in order to strengthen Germany. ...read more.