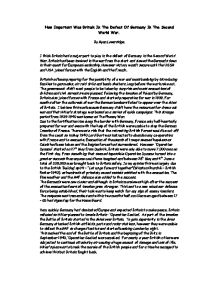 How Important Was Britain In The Defeat Of Germany In The Second World War.

How Important Was Britain In The Defeat Of Germany In The Second World War. By Ryan Loversidge. I think Britain had a major part to play in the defeat of Germany in the Second World War. Britain had been involved in the war from the start and slowed the German's down in their quest for European leadership. However victory wasn't secure until the USSR and USA joined forces with the English and the French. Britain had been preparing for the possibility of a war and mass bombing by introducing families to gas masks, air raid drills and bomb shelters, long before the war broke out. The government didn't want people to be taken by surprise and mass evacuations of children and civil servants were planned. Following the invasion of Poland by Germany, Britain also joined forces with France and started preparation for war in 1939. For months after the outbreak of war the German bombers failed to appear over the skies of Britain. I believe this was because Germany didn't have the resources for drawn out war and that Hitler's strategy was based on a series of quick campaigns. This strange period from 1939-1940 was known as The Phoney War. Due to the fortification line along the border with Germany, France only half-heartedly prepared for war and even with the help of the British were unable to stop the German Invasion of France. ...read more.

The success of these devastating attacks was largely due to the experience gained in the Battle of Britain with the support of the American bombers. German industry used a lot of hydro electricity and scientific developments like the 'bouncing bomb' enabled attacks to be made the dams crippling the power supply to industry. At the same time in the Atlantic Germany had used U-boats to destroy merchant shipping carrying supplies to Britain. Initially there were huge shipping losses; Britain wasn't prepared for this style of attack. Better and faster escort vessels were built these and with the support from the bomber planes Britain won the Battle in the Atlantic and supplies were not halted. However during this battle the British Naval blockade affected supplies to Germany, making them dependent on supplies from countries they had already invaded. Although Britain was only a small country, the country united in its battle against Germany with Winston Churchill as the government leader from May 1940. In his speech to the people on 13th May 1940 Churchill said, "You ask, what is our policy? I will say: It is to wage war, by sea, land and air, with all our might. You ask, what is our aim? I can answer in one word: Victory - victory at all costs, victory, however long and hard the road may be". ...read more.

Prior to this the USA had sold supplies to anyone with gold to buy them. America had no difficulties with supplies or threats to their own security and became the 'arsenal of the free world' able to build factories to produce, build new and better armed ships, planes & tanks in large numbers. As the war progressed Britain slowly ran out of money. Thankfully Roosevelt, the American leader implemented the "Lend & Lease Act", this permitted them to lend or lease supplies to any government whose defence was vital to the USA. This act helped the British survive by aiding them with money and equipment; this help was also given to Russia later in the war. Roosevelt also saw that Hitler was mastering Europe and after talks with Churchill they agreed that Germany not Japan were the main enemy. After joining forces with Britain, America was also able to send troops and equipment to Africa and Europe. The USSR also played a role in supporting Britain, Hitler had thought that his invasion of the USSR would go swiftly but the USSR fought back. A huge amount of Hitler's resources were taken up with the invasion of Russia, giving Britain the opportunity of greater success in Europe and Africa. I feel I have shown the vital parts that Britain played in the defeat of Germany in the Second World War. Without Britain's determination, resistance and leadership qualities, Britain would not have gained the support of the other super powers. ...read more.