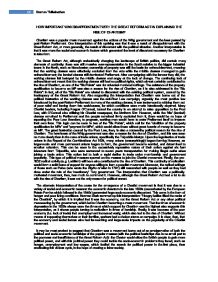 HOW IMPORTANT WAS DISAPPOINTMENT WITH THE GREAT REFORM ACT IN EXPLAINING THE RISE OF CHARTISM?

HOW IMPORTANT WAS DISAPPOINTMENT WITH THE GREAT REFORM ACT IN EXPLAINING THE RISE OF CHARTISM? Chartism was a popular mass movement against the actions of the Whig government and the laws passed by post-Reform Parliament. One interpretation of this uprising was that it was a result of disappointment with the Great Reform Act, or more generally, the result of discontent with the political situation. Another interpretation is that it was more the social and economic factors which generated the level of discontent necessary for Chartism to take form. The Great Reform Act, although undoubtedly changing the landscape of British politics, did contain many elements of continuity: there was still massive over-representation in the South relative to the bigger industrial towns in the North, such as Manchester; ownership of property was still the basis for enfranchisement, meaning that the working classes were effectively excluded from the vote while the middle classes managed to gain enfranchisement; the landed classes still dominated Parliament. ...read more.

The great frustration caused by the Poor Law, then, is also a noteworthy political reason for the rise of Chartism. The harshness of the Whig government was also a reason for the rise of Chartism, and this was seen no more clearly than in the case of trade unions, specifically the Tolpuddle Martyrs. Upon the legalisation of trade unions in the Repeal of the Combinations Act 1824, many unions (unsurprisingly) began forming. However, as larger-scale and more permanent unions began to form, the government became worried, and determined to smother unionism. This can be seen in the excessively repressive nature of their action against six farm labourers from Tolpuddle, who were sentenced to seven years transportation for making illegal oaths when joining a trade union. This action led to both a rapid decline in trade union membership and government popularity. This type of political measure spurred on the masses to join the Chartist movement. Finally, the pre-1832 radical activity (e.g. Luddism) will have also contributed to the rise of Chartism. ...read more.

Finally, it was because of the poor economy (i.e. lack of trade) that unemployment increased vastly, which also led to the rise of Chartism. Without means of supporting themselves or their families, workers had a choice: starve or campaign. It is clear, then, that the economy and social factors also had far-reaching and large-scale impacts on the popularity of the Chartist movement. It may be most prudent to suggest that Chartism was a movement borne out of an amalgamation of both the political and socio-economic hardships of the popular masses (with the political hardships due in no small part to the poorness and insufficiency of the Great Reform Act): the Charter would allow the British people to gain more political power, and with this political power they could tackle the socio-economic problems they faced, such as hunger, unemployment and low wages, which fuelled the search for political power in the first place, thus eradicating this vicious cycle, in the hope of creating a fairer society. ?? ?? ?? ?? ...read more.