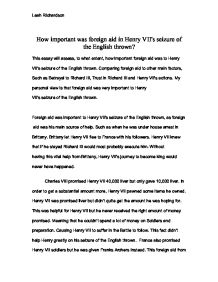 How important was foreign aid in Henry VII's seizure of the English throne?

As Henry now has noble families on his side rather than Richard III creating more Solders, as noble families will now give Henry some of there own Solders. This will help Henry VII, as France didn't give what they're promised. Henry VII will now be able to fight Richard with a fair amount of soldiers that he has gathered. In conclusion Henry VII's more important factor, which helps him seize the English thrown is foreign aid as in comparison to all of the other factors, Henry VII could not have traveled to England, also he would have still been stuck under house arrest in Brittany. All off the factors are inter linked with each other. Meaning that Henry VII couldn't have attacked Richard III without any of them Happening. Foreign aid over all is the most important though, as he would not Have had a chance to fight Richard III without the help that he was given. Leah Richardson ...read more.