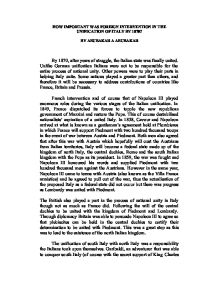 How important was foreign intervention in the unification of Italy by 1870?

HOW IMPORTANT WAS FOREIGN INTERVENTION IN THE UNIFICATION OF ITALY BY 1870? BY ABUBAKAR A ABUBAKAR By 1870, after years of struggle, the Italian state was finally united. Unlike German unification Italians were not to be responsible for the entire process of national unity. Other powers were to play their parts in helping Italy unite. Some nations played a greater part than others, and therefore it will be necessary to address contributions of countries like France, Britain and Prussia. French intervention and of course that of Napoleon III played enormous roles during the various stages of the Italian unification. In 1849, France dispatched its forces to topple the new republican government of Mazzini and restore the Pope. ...read more.

and he agreed to pull out of the war, thus the actualisation of the proposed Italy as a federal state did not occur but there was progress as Lombardy was united with Piedmont. The British also played a part in the process of national unity in Italy though not as much as France did. Following the will of the central duchies to be united with the kingdom of Piedmont and Lombardy. Through diplomacy Britain was able to persuade Napoleon III to agree so that plebiscites can be held in the central duchies to certify their determination to be united with Piedmont. This was a great step as this was to lead to the existence of the north Italian kingdom. ...read more.

As a result of this Rome was vacant and under no foreign influence or occupation thus the Italians once again took it upon themselves to complete the process of national unity. At this stage the complete unification of Italy has been achieved even though there was still division amongst the people of Italy. The unification of Italy would not have been possible without foreign support but nonetheless the Italians were solely responsible for the unification of south Italy. So far the most contributory factor amongst the both the foreign and internal factors is the French support against the Austrians that ensured their permanent expulsion from the Italian territory of Lombardy which we can say triggered other events that led to the completion of the process of unification. ...read more.

This is a well focused answer that explores the key reasons for unification and makes judgments about their importance. Explanations are brief in places though so more evidence would have enhanced the answer.