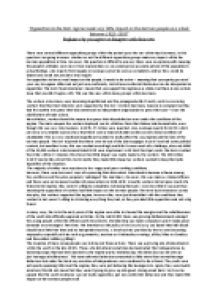 How Important was German Opposition to the Nazis?

﻿?Opposition to the Nazi regime made very little impact on the German people as a whole between 1933?1939? Explain why you agree or disagree with this view There were several different opposition groups within the period up to the war within Nazi Germany, in this question I am going to assess whether or not the different opposition groups made any impact within the German population at time. However, this question is difficult to answer; there were no opinion polls meaning the people?s attitudes were never truly represented, so we cannot get an accurate picture of the population?s actual feelings. Also reports from Sopade or Gestapo cannot be seen as completely valid as they would be biased and would not provide a true insight. For opposition to have a real impact on the people, it needs to be active ? meaning that you openly go out of your way to oppose Hitler and not just non-conformity. Not all non-conformist behaviour can be interpreted as opposition. The term ?loyal reluctance? means that you support the regime as a whole, but there is one certain issue that you didn?t agree with. This was the case within many groups within Germany. ...read more.

The response of many young people was to drop out these activies. There was a growing rate of absenteeism within the youth in the late 1930?s. Those who did attend sometimes demonstrated their independence by humming songs that had been banned by the regime and by misbehaving. This behaviour can be seen as just ?teenage rebelliousness?. This nonconformist behaviour amounted to little more than normal teenage behaviour but under the Nazis any assertion of independence was considered to be a threat. The youth were not openly opposing Hitler and the regime; they were just behaving like teenagers do. Again, they were loyally reluctant; this did not mean that they weren?t going to grow up into good, strong proud Nazis. So it can be argued that the youth resistance was not really opposition, just non-conformist behaviour and thus made little impact on the German people at all. The protestant supported Nazi ideas as they were nationalist themselves, they were both anti-semeitic and anti-communist, two of the Nazi polices. However, not all Protestants were willing to support developments in the church. The establishment of the pastor?s emergency league in 1933 and its development into the Confessional church in 1934 by themselves were acts of resistance ? they were led by pastors who weren?t members of the Nazi party, thus going against the regime. ...read more.

The churches did not provide a massive challenge to the regime; Protestants supported the Nazis anyway because of there nationalist ideas. So they did not cause much of a problem. The Catholic Church just wanted to be allowed to carry on practicing religion without interference from the Nazis, and thus they would stay out of affairs to do with politics. They were not serious opposition against Hitler and the Nazis. However, it is worth noting that there was a growing number of absenteeism from the workers and the youth. Although this was severely clamped down on. The biggest challenge was proposed by the JW?s, they openly opposed Hitler and did not conform with any of the rules as they swore their oath to Jehovah and Hitler, however they were a small group and were easily picked off with no problem and thus caused very limited impact on the German people as a whole. The same can be said to all the other opposition groups and loyal reluctance was a common theme throughout a lot of the opposition groups excluding the Jehovah?s witnesses. Overall, opposition provided little impact to the regime and had little impact on the German people, as the Nazi regime could easily crush these groups before any real opposition was mounted. ...read more.