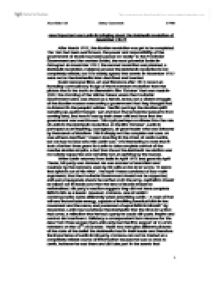 How important was Lenin in bringing about the Bolshevik revolution of November 1917?

How important was Lenin in bringing about the Bolshevik revolution of November 1917? After March 1917, the Russian revolution was yet to be completed. The Tsar had been overthrown, the power and responsibility of the government of Russia had been passed on 'duelly' to the Provincial Government and the workers Soviet, the most powerful Soviet in Petrograd. In November 1917, the second revolution was planned, a Bolshevik revolution. Evidence around the Bolshevik revolution is not completely reliable, but it is widely agreed that events in November 1917 were not as the Bolsheviks later described and boasted. Soviet censored films, art and literature after 1917 record an incredibly contradictory image of the November revolution than the picture that is the truth. In Eisenstein's film 'October' that was made in 1927, the storming of the Winter Palace where the Provincial Government were, was shown as a heroic, brave, but a violent struggle of the Russian masses overcoming a government that they thought had no interest in the people's wishes. The film portrays the Russian spirit standing up against hunger, war and laws that prevented peasants from owning land, and how it was by their sheer will and force that the government was overthrown. This myth perhaps continues into the role of Lenin in the Bolshevik revolution. In the film 'October', Lenin is portrayed as an inspiring, courageous, all great leader who was followed by thousands of Russians. This is simply not the complete real case. As one witness describes; "I heard shouting in the street of Lenin! Lenin!, but we had no idea who this Lenin was." ...read more.

First of all, they decided to continue the War against Germany; a War that Russia was already loosing badly in. Minister's thought if better managed, the War could swing in their favour, but they were wrong. In June, Kerensky ordered a new Offensive, continuing the concentration of factories on producing ammunitions, not food. People in the cities and all over Russia had to live with increasing food shortages and inflation was high, as it had been just before the Tsar was taken from power. Conditions were worse than ever. The June Offensive turned into a military disaster and thousands of discontented soldiers - urged by Bolsheviks - left the front and returned home. People hence rejected Kerensky and turned to other parties, such as the Bolsheviks that promised reliable conditions and food. The second main mistake was the decision by the Provincial Government to disallow land reform. All over Russia, peasants were taking advantage of the messy and uncoordinated political circumstances by taking land and property from the rich nobles, as much as they could. The government refused to make this legal, claiming they did not have the right as they didn't belong to an elected institution. However if they had recognised the mobs of peasants, then Russia might have fallen into an unlawful chaotic riotous country. The decision to not make land reforms legal gave more reasons for soldiers to desert at the front, most of them were peasants, and claim their own land. It also made the Provincial Government very unpopular with the slowly starving peasants, whose mass made up nearly all of the Russian population. ...read more.

He was only involved in the revolution after he returned from exile in April, given pass by the Germans who thought he might be able to overthrow the Provincial Government. He was organised and knew what he wanted and was encircled by loyal followers like Trotsky who proved invaluable. It is true that some main ideas came from other men, but Lenin was ultimately responsible for his Party and its actions. He was in exile for some months of 1917, and the circumstances that Russia was facing gave the Bolshevik party a huge boost. It was Lenin though who insisted that they had to overthrow the Provincial government by force and that they do it soon. It was Lenin's April Theses, for a while unsupported, that outlined in the end how the Bolsheviks gained a lot of support. I believe however, it was not just Lenin and Trotsky that brought around the Bolshevik revolution. The Provincial Government helped the Bolsheviks gain support by their mistakes and gave the Bolsheviks fuel to use against them. Other parties were disorganised and the people were induring food shortages and bad conditions, they had little else to turn to. On the night of the November revolution there was little resistance and only 1 in 600 Russians supported the Bolsheviks. However, it remains that Lenin knew he was going to die and he wanted to be alive to see the revolution. It was Lenin who insisted and pushed the Bolsheviks into motion. I think he was an important factor in the November 1917 revolution, but there were many other factors that allowed the Bolshevik revolution to take place. Alone he could not have made the revolution happen, but it was all other contributing events that brought the revolution together. Alice Gibbs 11N History Coursework 27/9/01 1 ...read more.