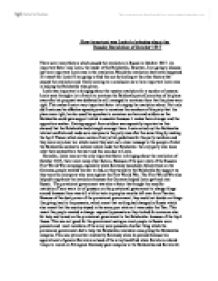 Because of the poor state of the Russian First World War campaign, especially when Kerensky launched a failed attack on the Germans, people wanted the war to end, so they turned to the Bolsheviks for support as they were the only party who were against the First World War. The First World War also helped bring about the revolution because the Germans helped Lenin get back into Russia. The provisional government was also a factor that bought the need for revolution.There was a lot of pressure on the provisional government to change things around because there was still a bitter taste in peoples mouths left over from Tsarism. Because of the dual power of the provisional government, they could not decide on things like giving land to the peasants, which meant that nothing had changed in Russia which also meant that the country stayed in the same poor state as it was under the Tsar. ...read more.

Although Lenin made the plan for the revolution, Trotsky made Lenin realise that the 7th of November was the right time to do it, we do not know if Lenin would have succeeded if he did the revolution at the end of October, but what we do know is that the 7th November, the time Trotsky picked, definetely worked. This means that Trotsky deserves credit for bringing about the revolution too. Overall, I think that Lenin was a major factor in bringing about the October 1917 revolution and the evidence to show that if Lenin was not there, the Bolsheviks wouldnt have seized power is overwhelming. However, a factor that was just as important was Kerensky and the Provisional Government's weaknesses. Lenin expertly knew how to play off these weaknesses to his advantage which ultimately brought about the revolution which brought the Bolsheviks power in Russia. But Lenin was not the sole saviour of the Bolsheviks, Trotsky was also a major factor because the time which he planned to carry out the revolution was impeccable and his expert tactics made it very easy for the Bolsheviks to take power. ...read more.