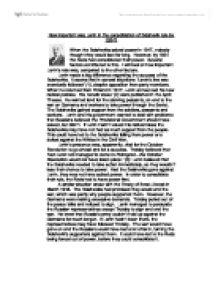 How important was Lenin in the consolidation of Bolshevik rule by 1924?

How important was Lenin in the consolidation of Bolshevik rule by 1924? When the Bolsheviks seized power in 1917, nobody thought they would last for long. However, by 1924 the Reds had consolidated their power. Several factors contributed to this. I will look at how important Lenin's role was, compared to the other factors. Lenin made a big difference regarding the success of the Bolsheviks. It seems that in several situations 'Lenin's line was eventually followed' (1), despite opposition from party members. When he returned from Finland in 1917, Lenin announced his new radical policies. His 'lunatic ideas' (2) were published in the April Theses. He wanted land for the starving peasants, an end to the war on Germany and workers to take power through the Soviet. The Bolsheviks gained support from the soldiers, peasants and workers. Lenin and his government wanted to deal with problems that Russians believed the Provisional Government should have solved, but didn't. If Lenin hadn't voiced his radical ideas the Bolsheviks may have not had as much support from the people. This could have led to the Bolsheviks falling from power or a defeat against the Whites in the Civil War. Lenin's presence was, apparently, vital for the October Revolution to go ahead and be a success. Trotsky believed that 'had Lenin not managed to come to Petrograd...the October Revolution would not have taken place.' ...read more.

Eventually the party decided, again, to back Lenin. There were divisions in the party due to the discontent in the cities over War Communism and if the Bolsheviks were to hold on to their power, they needed to stay united. Political repression, in the form of censorship, attacks on the Church and attacks on political rivals, accompanied the NEP. This was to prevent the return of Capitalism, which could result in a political system based on a coalition government. The NEP was probably vital for keeping the Bolsheviks in power. The peasants and workers were on the point of rebellion. Although Lenin played a big part in the success of the Reds, many other factors helped them consolidate their rule. Trotsky played a huge part during the Civil War, providing the Reds with a good war leader and strategist. The Whites were divided and lacked co-ordination with the allied armies. They were spread out allowing Trotsky to co-ordinate his forces and fight the White armies one at a time. The Bolsheviks were also in a better geographical position, based near Moscow, with the advantage of internal lines of Communication and control of the railways. He ensured tough discipline in the army, with the death penalty being used often, whereas the Whites had a problem with desertion. Had Trotsky not been appointed War Commissar, by Lenin, in 1918, the Reds chance of winning the Civil War would have been greatly reduced. ...read more.