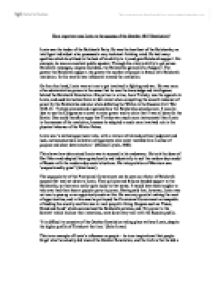 How important was Lenin to the success of the October 1917 Revolution? Lenin was the leader of the Bolshevik Party. He was the heartbeat of the Bolsheviks, an intelligent individual who possessed a very technical-thinking mind. He had many qualities which he utilised to the best of his ability to try and gain Bolshevik support. For example, he was an excellent public speaker. Through his oratory ability to get across Bolshevik messages, slogans and ideas, the Bolsheviks gained lots of support. The greater the Bolshevik support, the greater the number of people in favour of a Bolshevik revolution. In this way he was influential toward the revolution. ...read more.

Lenin was 'a skilled opportunist who, with a mixture of shrewd political judgment and luck, outmanoeuvred a collection of opponents who never matched him in sense of purpose and sheer determination.' (Michael Lynch, 1992) This shows how determined Lenin was to succeed in his endeavour. He took the ideas of Karl Marx and adapted them agriculturally and industrially to suit the modern-day model of Russia with the modern-day social situations. His interpretation of Marxism was 'unquestionably great' (John Laver). The unpopularity of the Provisional Government can be seen as a factor of Bolshevik success that was not down to Lenin. Their policies and failures handed support to the Bolsheviks, so they were really quite lucky in that sense. ...read more.

(John Laver) This is an example of Lenin's influence on people - he is so inspirational that people forget what he actually did toward the October Revolution, and the truth is that he did a lot of preparation work and behind-the-scenes activity, but on the actual night of the coup, Lenin was barely involved at all. In conclusion, I believe that Lenin and Trotsky were both equally as important in ensuring a successful takeover of power. Lenin, for his part, did his bit, gathering support and leading the way. Trotsky did his bit on the night, acting as stand-in leader, arranging the takeover and executing it to perfection. Both were significant figures for the Bolsheviks, but I don't think Lenin was necessarily the chief factor of their success. ...read more.