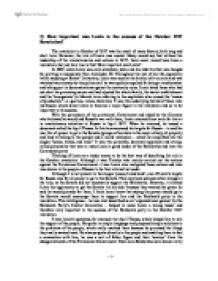 1) How important was Lenin to the success of the October 1917 Revolution? The revolution in October of 1917 was the result of many factors, both long and short term. However, the role of Lenin was crucial. Many would say that without his leadership of the revolutionaries and actions in 1917, there never would have been a revolution, but just how true is this? How important was Lenin? In 1887, when Lenin was only seventeen years old, his elder brother was hanged for plotting to assassinate Tsar Alexander III. Throughout the rest of his life, especially whilst studying at Kazan' University, Lenin was seen as the brother of a terrorist and was watched very closely by the police until he was quickly expelled for being a troublemaker and taking part in demonstrations against the university rules. Lenin hated those who had cut short his promising career and had rejected his whole family, the tsarist establishment and the 'bourgeoisie' (a Marxist term referring to the capitalists who owned the 'means of production' i.e. quarries, mines, factories). It was this underlying hatred of those who led Russia which drove Lenin to become a major figure in the revolution and so to be important to its success. With the permission of the provisional Government and aided by the Germans who believed he would end Russia's war with them, Lenin returned from exile for his art in revolutionary activities to Russia in April 1917. When he returned, he issued a document called the April Theses. In this he announced his targets for Russia - to end the war; for all power to go to the Soviets (groups of workers in the major cities); all property and land to belong to the people and a world revolution - which he simplified into the slogan "peace, bread, and land." It was this powerful, dominant approach and strong-willed personality that was to make Lenin a good leader of the Bolsheviks and later the Communist party. ...read more.

From 1918 to 1924 Lenin was still a leader but in a different way. A few days after the October revolution, he was elected chairman of the Council of People's Commissars - effectively the head of the government and therefore of Russia. As he had already won the revolution and come into power, there was less of a need for Lenin to prove to the world and himself that he could be a great leader. He was more confident in his abilities as a leader. An example of this is the assassination attempt on Lenin during the civil war when he did not go into hiding, showing a confident and strong leader for his people, compared to during the revolution when he did hide when his life was threatened. This more confident approach to leadership meant that Lenin was able to simply get on with the job of transforming Russia in the way he wanted to. The main reason Lenin was very significant in 1917 was because he was a figurehead for the ordinary people of Russia to place their faith in. He gave them something to believe in, the idea that one day all the people of Russia would be equal. He encouraged the people with his four aims for Russia - power to go to the Soviets; an end to the war; all property and land to belong to the people; world revolution - outlined in his April Theses and simplified into the slogan "peace, bread and land." This gave them a goal to work towards and so they were more likely to support Lenin in the revolution in order to achieve this goal. After the revolution, Lenin had his chance to carry out the ideas that he had used to inspire the people in 1917. As he was now in power, he was able to carry through the promises of 'peace, bread and land.' ...read more.

The immense respect of the people of Russia for Lenin was not just in the time of Stalin. The respect and the idea of him as the 'father of Russia' continued until much later. Placards on Russian streets in the 1960s read: "Lenin is more alive than all those living now". In 1970 with the centenary of Lenin's birth there were more commemorations to him including statues, books, films, festivals, tours to Lenin sites, new medals, new museums, postage stamps and gramophone records, showing that he was still very much a part of the lives of the people. Statues of Lenin 'pointing the way forward' remained in every major Russian city until 1986 when the fall of the Berlin wall and the iron curtain effectively ended communism in Europe. As well as the significance of Lenin as an idea and a figure for the people to look up to, Lenin also remained significant because of what he had done. Plans he had put into action during his time as head of the government, significantly the Fundamental Law and new Economic Policy, really began to work in about 1925. Other ideas Lenin had had for industrialisation, which he had not implemented, were also put into effect after his time, adding to Lenin's importance and influence in Russia following his death. The main way in which Lenin remained significant in Russia after his death was in the hearts and minds of the people. They still saw him as the father figure of Russia and a role model for them all so they respected him and his ideas. This meant that he was important as a tool for others, especially Stalin, to help them get their ideas accepted by the people. He was also important as the ideas he had implemented, such as the Fundamental Law, remained effective during the time after his death. 1) 1250 2) 1543 3) 1167 - 1 - ...read more.