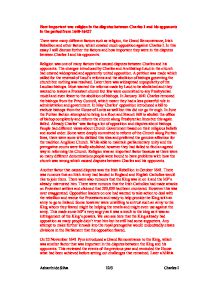 How important was religion in the disputes between Charles I and his opponents in the period from 1640-1642?

How important was religion in the disputes between Charles I and his opponents in the period from 1640-1642? There were many different factors such as religion, the Grand Remonstrance, Irish Rebellion and other factors, which created much opposition against Charles I. In this essay I will discuss further the factors and how important they were in the disputes between Charles I and his opponents. Religion was one of many factors that caused disputes between Charles and his opponents. The changes introduced by Charles and Archbishop Laud in the church had created widespread and apparently united opposition. A petition was made which called for the reversal of Laud's reforms and the abolition of bishops governing the church but nothing was resolved. Later there was widespread unpopularity of the Laudian bishops. Most wanted the reforms made by Laud to be abolished and they wanted to restore a Protestant church but few were committed to any Presbyterian model and even fewer to the abolition of bishops. In January 1641 Charles removed the bishops from the Privy Council, which meant they had a less powerful role in administration and government. ...read more.

Some however were unwilling to entrust such an army to the King whom they feared might be helping the revels and might even use against the army. This made some MP's very angry as it was a insult to the king as it was an infringement of the King's powers. We can see here that the King already had opposition as many people didn't trust him but he still had some supporters. Any attempt to make further inroads into the royal prerogative would undoubtedly create divisions in the Parliament that the opposition feared. On 22 November 1641 Pym introduced a Grand Remonstrance to the King, which was another factor that was important in the disputes between the King and his opponents. This reviewed the events of the previous year and reminded the House what had been achieved before setting out challenges that remained. Later a Militia Bill providing an army for Ireland was introduced, with an amendment proposing that Parliament should be given the right to approve the King's choice of commander. ...read more.