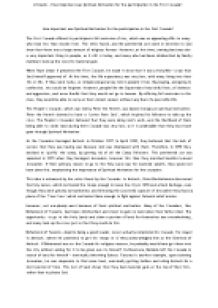 How important was Spiritual Motivation for the participation in the First Crusade?

Therefore, in 1098 they decided to ?purify? the camp, by getting rid of all the Camp Followers. This penitential act was repeated in 1099 when they besieged Jerusalem, however this time they marched barefoot around Jerusalem. If their primary reason to go to the Holy Land was for material wealth, they would not have done this, emphasising the importance of Spiritual Motivation for the crusaders. This idea is enhanced by the relics found by the Crusader. In Antioch, Peter Bartholomew discovered the Holy Lance, which motivated the troops enough to leave the city in 1098 and attack Kerboga, even though they were greatly outnumbered, and following the successful capture of Jerusalem they found a piece of the ?True Cross? which motivated them enough to fight against Fatamid relief armies. However, not everybody went because of their spiritual motivation. Many of the Crusaders, like Bohemond of Taranto, had been disinherited and stood to gain no land when their father died. ...read more.

They took as much of the wealth that they could, and raped and killed its citizens. Although they had planned to reduce the number of infidel, this was by all means a massacre, which they benefitted from. If they had truly been there just for spiritual reasons alone, they may have converted Muslims into Christendom, rather than murder them outright. Although material wealth probably played a key role in why the leaders went on the Crusade, the rank and file did not stand to gain as much land. Approximately two out of every three Crusaders died or deserted on the way to Jerusalem, and paying your life for material gain was not thought highly of for peasants to be doing, even in the Middle Ages. In my opinion, Spiritual Motivation was the pivotal reason for why a majority went on Crusade, as the risks they took, they penitential acts they took a part in and their devotion to the relics and the cross all greatly outweigh the idea that they would have gone just for land or wealth. ...read more.