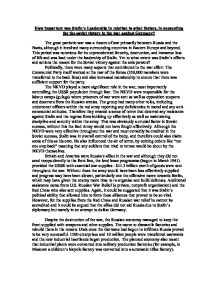 How important was Stalins Leadership in relation to other factors, in accounting for the soviet victory in the war against Germany?

How important was Stalin's Leadership in relation to other factors, in accounting for the soviet victory in the war against Germany? The great patriotic war was a theatre of war primarily between Russia and the Nazis, although it involved many surrounding countries in Eastern Europe and beyond. This period was notorious for its unprecedented ferocity, destruction, and immense loss of life and was lead under the leadership of Stalin. Yet to what extent was Stalin's efforts and actions the reason for the Soviet victory against the axis powers? Politically, there were many aspects that contributed to the war effort. The Communist Party itself worked at the rear of the forces (350,000 members were transferred to the back lines) and also increased membership to ensure that there was sufficient support for the party. The NKVD played a more significant role in the war, most importantly controlling the USSR population through fear. The NKVD were responsible for the labour camps (gulags) where prisoners of war were sent as well as opposition suspects and deserters from the Russian armies. The group had many other roles, including undercover officers within the red army reporting any deficiencies in moral and any anti-communist attitudes. ...read more.

An example of this is Kulik who delayed the production of Katyusa rockets and T34 tanks due to a belief that more old fashioned artillery and horsepower were more effective war methods. However, Soviet success was also the result of meticulous planning and military excellence of many other of the Russian leaders, for example Vasilevsky who was responsible for the planning and co-ordination of all decisive offences and Chuikov who commanded in Stalingrad. The man with the most influence militarily however was General Zhukov who oversaw the defence of Leningrad and orchestrated the first breakthrough, commanded in the Battle of Kursk and launched the final attack on Germany, including capturing Berlin. Further than this Zhukov was more fearless than many others of the leaders and stood up for his military ideas. It could be suggested that this was the main reason that Stalin eventually accepted that his tactics needed updating and moved away from his previous military ideas. Had the Red Army continued with these they may never have won the war as the outdated tactics were very unsuccessful. The Stavka ended up being a very effective team, some disagreement with Stalin was tolerated and the result was concrete military decisions that resulted in Soviet success. ...read more.

Stalin also managed to mobilise and encourage women into the war effort. Women took on roles within factories, farms and other men's positions such as miners and welders. At the beginning of 1940 women made up 41% of labour front and over 800,000 saw active service on the battlefields (ordered after 1942). Another social change that Stalin made during the war were the religious concessions. For example, in 1942 the labour camps were searched for religious men who were then allowed home and in 1943 they Russians elected a new patriarch and synod. These proved very successful and brought him more support as the religious Russians had previously felt oppressed. Stalin as a war leader was always resolute and determined. It is unquestionable that Stalin was courageous, despite German attack he remained with his family in Moscow rather than fleeing to Kuibyshev. Although he did make some mistakes, particularly during the openings of the war, he did manage to amend many of these. The ways in which Stalin helped make the Soviet war success certainly outweigh his hindrances in both number and significance. Without such a powerful, charismatic and talented leader, Russia would have been much more likely to be defeated in the Great Patriotic war. ?? ?? ?? ?? ...read more.