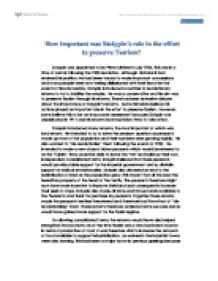 How Important was Stolypin?

How important was Stolypin's role in the effort to preserve Tsarism? Stolypin was appointed to be Prime Minister in July 1906. This was in a time of turmoil following the 1905 revolution. Although Nicholas II had retained his position, he had been forced to make important concessions and many people were now feeling disillusioned with their Tsar after the events of Bloody Sunday. Stolypin introduced a number of revolutionary reforms to try to stabilise the empire. He was a conservative and his aim was to preserve Tsarism through his reforms. There has been extensive debate about the importance of Stolypin's reforms. Some historians believe his actions played an important role in the effort to preserve Tsarism. However, some believe this to be an inaccurate assessment because Stolypin was assassinated in 1911 and his reforms had insufficient time to take effect. Stolypin introduced many reforms, the most important of which was land reform. ...read more.

Another reform that also helped the position of the peasants and therefore increased their support for the Tsarist regime was the increase of welfare spending. Zemstva expenditure on health, poor relief and agricultural advice almost doubled between 1906 and 1912. This was therefore another popular reform. His reforms in education were also successful in that the number of primary schools almost doubled between 1906 and 1912. These again would have benefited the peasants because for the first time many of their children would be receiving an education which would lead to generally a better educated populace leading to more advancement in terms of technology and agriculture. However, Stolypin also tried to introduce other reforms in government which were less successful. One of these was to try to bring about religious toleration. This reform was eventually passed by the Duma after a long struggle but then it was vetoed by the Tsar. ...read more.

Many revolutionaries therefore went into hiding and so revolutionary ideas were not able to spread throughout the population. During the period of Stolypin's reforms many of the revolutionary groups were divided and many leaders remained in exile. Therefore in conclusion it is possible to see from the evidence that Stolypin played quite an important role in the effort to preserve Tsarism. However, it is also possible to see that if he had not been assassinated in 1911 then he would have been even more important for even he acknowledged that his reforms would take a long time and would not just happen overnight. Stolypin himself believed that his reforms needed twenty years to become fully effective. They were only given five years until his death, after which time Nicholas abandoned them and the role of the Duma. He replaced Stolypin with Goremykin who had little commitment to his post. However, despite Stolypin's efforts to reform, the problems in Russia were deeply rooted and not helped by the character of Nicholas II. His efforts would therefore only postpone the inevitable fall of Tsarism. ?? ?? ?? ?? ...read more.