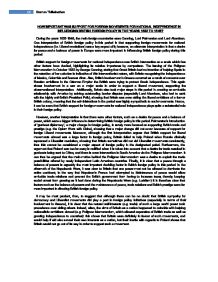 how important was support for foreign movements for national independence in influencing British foreign policy in the years 1822 to 1846?

HOW IMPORTANT WAS SUPPORT FOR FOREIGN MOVEMENTS FOR NATIONAL INDEPENDENCE IN INFLUENCING BRITISH FOREIGN POLICY IN THE YEARS 1822 TO 1846? During the years 1822-1846, the main foreign secretaries were Canning, Lord Palmerston and Lord Aberdeen. One interpretation of British foreign policy in this period is that supporting foreign movements for national independence (i.e. Liberal revolutions) was a key aspect of it; however, an alternate interpretation is that a desire for peace and a balance of power in Europe were more important in influencing British foreign policy during this period. British support for foreign movements for national independence saw British intervention on a scale which few other factors have rivalled, highlighting its relative importance by comparison. The issuing of the Polignac Memorandum in October 1823 by George Canning, stating that Great Britain had no intention of helping Spain in the retention of her colonies is indicative of this interventionist nature, with Britain recognising the independence of Mexico, Columbia and Buenos Aires. ...read more.

However, another interpretation is that there were other factors, such as a desire for peace and a balance of power, which were a bigger influence in determining British foreign policy in this period. Palmerston's introduction of 'gunboat diplomacy', a major change in foreign policy, is surely more focused on supporting British trade and prestige (e.g. the Opium Wars with China), showing that a major change did not occur because of support for foreign Liberal movements. Moreover, although the first interpretation argues that British support for liberal movements abroad was a large factor in foreign policy, Britain failed to help Poland when Russia clinically repressed a Liberalist revolution, showing that Britain sometimes did not aid Liberalist movements consistently, thus this cannot be considered a major aspect of foreign policy in the designated period. Furthermore, the argument that Poland was too far away is nullified when it is taken into account that a desire for trade resulted in gunboats being sent to China, and there is even intervention in South America via the Polignac Memorandum. ...read more.

It may be most prudent, then, to suggest that although there can be no doubt that British sympathy for democracy and Liberalist movements did play a part in foreign policy initiatives (especially in terms of their involvement in Greece), it is clear that the natural self-interests (e.g. trade) of such a large world power took precedence over aiding others. Indeed, often, the aims of Britain as a nation happened to coincide with helping nationalistic ambitions abroad (e.g. Polignac Memorandum, which allowed expansion of British trade as well as granting independence to countries): this shows that Britain were definitely in favour of such movements, and would help if aid also served their own interests as a nation, but their inertia with regards to Poland shows that Britain would not go out of its way in order to support such a movement. ?? ?? ?? ?? ...read more.