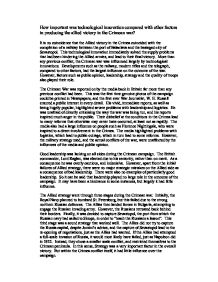 How important was technological innovation compared with other factors in producing the allied victory in the Crimean war?

How important was technological innovation compared with other factors in producing the allied victory in the Crimean war? It is no coincidence that the Allied victory in the Crimea coincided with the completion of a railway between the port of Balaclava and the besieged city of Sevastopol. This technological innovation immediately solved the supply problems that had been hindering the Allied armies, and lead to their final victory. More than any previous conflict, the Crimean war was influenced largely by technological innovations. Developments such as the railway, modern rifles and the telegraph, compared to other factors, had the largest influence on the outcome of the war. However, factors such as public opinion, leadership, strategy and the quality of troops also played their role. The Crimean War was reported on by the media back in Britain far more than any previous conflict had been. This was the first time genuine photos of the campaign could be printed in Newspapers, and the first ever War Journalist, W. ...read more.

The Allies then landed forces in Bulgaria, attempting to engage the Russian invading army. However, the Russians retreated back behind their borders. Finally, it was decided to capture Sevastopol, the port from which the Russian navy had sailed to Sinope, in order to "teach the Russians a lesson". This third stage was a sound strategy that worked well. The Allies did not try to capture the Russia capital, despite Jomini's advice, and the capture of Sevastopol lead to the re-opening of negotiations, just as the Allies had wanted. If the Allies had attempted a full-scale invasion of Russia, it would most likely have failed, just as Napoleon did in 1812. Instead, they chose a smaller scale conflict, and restricted themselves to the Crimean peninsula. In this sense, Strategy was a very important factor in the overall victory. But within the Crimea conflict itself, it had little influence over the campaign. The quality of the Allies' troops varied greatly. The Turkish troops were largely untrained and lacked motivation. On the whole they were there because their religion encouraged it. ...read more.

Eventually, the system of supply almost collapsed, and few supplies reached the troops at the front line. This inevitably meant the campaign was less successful, and Sevastopol was unable to be captured. The British military finally brought in a civilian railway firm, who constructed a railway line from the port of Balaclava up to the city. The supply problem was solved, with 300 tonnes of supplies able to be transported every day. Soon after its construction, the Allied army captured Sevastopol. The technological innovation of the railway provided the supplies needed for victory. This shows that technology played the most significant role in the Allied successes. As in all conflicts, the victor was decided by many factors. The outcome of the Crimean War was affected by strategy and quality of troops, and to a lesser extent leadership and the media. But the main influence on the outcome was the technological innovations put to use for the first time. The British infantry's new rifles allowed them to withstand the Russian attacks, and successfully capture Sevastopol, and the newly constructed railway gave them the supplies they needed to do so. ...read more.