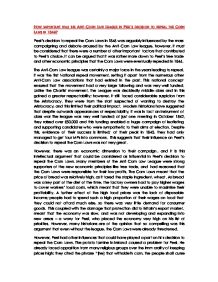 How Important was the Anti Corn-Law League in Peel's decision to repeal the Corn Laws in 1846?

HOW IMPORTANT WAS THE ANTI-CORN LAW LEAGUE IN PEEL'S DECISION TO REPEAL THE CORN LAWS IN 1846? Peel's decision to repeal the Corn Laws in 1846 was arguably influenced by the mass campaigning and debate aroused by the Anti-Corn Law league, however, it must be considered that there were a number of other important factors that contributed to Peel's choice. It can be argued that it was rather more down to Peel's free trade and other economic principles that the Corn Laws were eventually repealed in 1846. The Anti-Corn Law league was certainly a major force in the years leading to repeal. It was the first National repeal movement, setting it apart from the numerous other Anti-Corn Law associations that had existed in the past. This national concept ensured that the movement had a very large following and was very well funded. Unlike the Chartist movement, the League was decidedly middle-class and in this gained a greater respectability; however, it still faced considerable suspicion from the Aristocracy. They were from the start suspected of wanting to destroy the Aristocracy, and this limited their political impact. ...read more.

A further effect of the high food prices was the lack of disposable income; people had to spend such a high proportion of their wages on food that they could not afford much else, so there was very little demand for consumer goods. This coupled with the damage that protection did to Britain's export market, meant that the economy was slow, and was not developing and expanding into new areas - a worry for Peel, who placed the economy very high on his list of priorities. However, many historians are of the opinion that so compelling was this argument that even without the league, the Corn Laws were already threatened. However, Peel had other influences that could have played a part on his decision to repeal the Corn Laws. The potato famine in Ireland caused a problem for Peel. He already faced opposition from many religious groups over the immorality of keeping prices high; they cited the phrase "[he] that witholdeth corn, the people shall curse him" from the bible to illustrate their argument. ...read more.

Even then, it can be seen merely as a response to the extraordinary economic recovery of Britain following the success 1842 budget, which lead many to believe that complete free trade was the way forward. Following the 1845 budget in which even more tariffs were reduced and eliminated, the Corn Laws increasingly stood out as an anomaly that was unjustifiable. Therefore, we can consider that it was not Peel's free trade principles that lead him to his decision. The evidence suggests that although the Anti-Corn Law league was a formidable force in terms of its vast resources and stirring up of argument, it did not in fact have much impact on Peel's decision. Peel was more concerned with the economy, and whether it is argued that he was committed to free trade early on or decided that it was a good idea after the experimental 1842 budget we can conclude that it was this preoccupation with the economy that was the main spark for Peel's decision to repeal the Corn Laws. However, the issue of Ireland must also be considered, and although repeal would not have an effect on the situation there, it provided an occasion for Peel to complete the development of Britain into a free trading nation. ...read more.