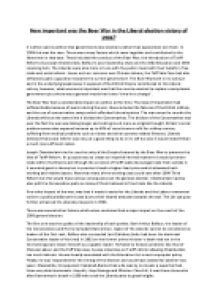 How important was the Boer War in the Liberal election victory of 1906?

﻿How important was the Boer War in the Liberal election victory of 1906? It is often said in politics that governments lose elections rather than oppositions win them. In 1906 this was the case. There were many factors which came together and contributed to the liberal win in that year. These included the conduct of the Boer War, the introduction of Tariff Reforms by Joseph Chamberlain, Balfour's poor leadership style and the 1902 Education and 1904 Licensing Acts. The Liberals were also more in tune with the public mood with their beliefs in free trade and social reform. Issues such as: concerns over Chinese Labour; the Taff Vale Case had also enflamed public opposition towards the current government. The Boer War both in its conduct and in the underlying weaknesses it exposed of the British Empire contributed to this Liberal victory, however, what was more important was that the country wanted to replace a complacent government plus there was a general mood that it was ?time for a change?. ...read more.

The Lib-Lab pact further enhanced the Liberals prospects in 1906. There was several other factors which when combined had a major impact on the result of the 1906 general election. The first one was the quality of the leadership of both parties. Both Arthur Balfour, the leader of the Conservatives and Henry Campbell-Bannerman, leader of the Liberals cannot be considered as leaders of the first rank. Balfour who succeeded Lord Salisbury (who had been the dominant Conservative leader of his time) in 1902 on the former prime minister?s death had not in the intervening years shown himself as a capable leader. He failed to foresee problems like that of Chinese Labour and the Taff Vale case, he was indecisive on Tariff reform allowing Chamberlain too much latitude. He was heavily associated with the Education Act a most unpopular policy. Finally, he was responsible for the timing of the election and could have waited for another two years. Meanwhile, his opponent Campbell-Bannerman who was by no means a superstar had three very able lieutenants: Asquith, Lloyd George and Winston Churchill. ...read more.

Finally, though the election was not fought on the issue of social reform, the issue of poverty in Britain in the early 1900s had come to the fore. The Boer War had exposed the amount of malnutrition, especially in the cities and led to concerns about the physical decline of the British race. Conservatives failed to address this problem in any significant way, whilst Liberals were working on a new form of Liberalism which would seek to tackle this problem. In conclusion, in the years before the 1906 general election, the Conservatives lacking leadership and direction managed to alienate large sections of the electorate. The Liberals were able to fight an essentially negative campaign exploiting Conservative policy errors. It also helped that the liberal party was united post Boer War. The Boer War certainly played a large part in the politics of this period. It helped the Liberals in many ways but the Conservatives were mainly the authors of their own misfortunes and it was these rather than the Boer War that had a decisive impact which enabled a Liberal victory. ...read more.