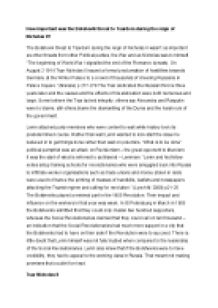 How important was the Bolshevik threat to Tsardom during the reign of Nicholas II?

﻿How important was the Bolshevik threat to Tsardom during the reign of Nicholas II? The Bolshevik threat to Tsardom during the reign of Nicholas II wasn?t as important as other threats from other Political parties, the War and as Nicholas was to himself. ?The beginning of World War I signalled the end of the Romanov dynasty. On August 2 1914 Tsar Nicholas II issued a formal proclamation of hostilities towards Germany at the Winter Palace to a crowd of thousands of cheering Russians in Palace Square.? (Massie) p 277-278 The Tsar abdicated the Russian throne three years later and the causes and the effects of his abdication were both numerous and large. Some believe the Tsar lacked integrity, others say Alexandra and Rasputin were to blame; still others blame the dismantling of the Duma and the harsh rule of the government. Lenin attacked party members who were content to wait while history took its predetermined course. Rather than wait Lenin wanted to kick-start the issue he believed in to get things done rather than wait on polemics. ?What is to be done? political pamphlet was an attack on Revisionism ? the great opponent to Marxism. It was the start of what is referred to as Marxist ? Leninism. ?Lenin and his fellow exiles setup training schools for revolutionaries who were smuggled back into Russia to infiltrate worker organisations such as trade unions and money stolen in ...read more.

Mutual distrust existing between great powers meant The Hague convention was among the first formal statements of the laws of war. On November 1 1894 Alexander III died suddenly from Nephritis. An unprepared naïve Nicholas II took power. A bewildered Nicholas beseeched his brother in law Grand Duke Alexander, “What am I going to do? what is going to happen to me, to all of Russia? I am not prepared to be a Tsar, I have never wanted to become one, and I know nothing of the business of ruling.” (Rollins xvi) Nicholas II was a strong believer in the autocratic power of the Tsar and opposed democratic reforms. When Nicholas took the throne he had some experience in Government but due to his father’s untimely death he had not fully been elevated into the higher tiers of the Russian Government. Nicholas was also very naïve in his dealings with the Urban Intelligentsia, this would later hamper his reign. The Japanese soon took Port Arthur in the Russo – Japanese war and the Tsar realized he must admit defeat. “Russia lost not because her troops fought badly, but because her military commanders had not prepared effectively.” (Lynch M 2005) p 30-38 In autumn of 1915 Nicholas had taken direct command of the army, personally overseeing Russia’s main theatre of war and leaving his ambitious but incapable wife Alexandra in charge of the government. ...read more.

(Murphy D & Morris T 2008) p 61-62 When the revolution of1905 led to the legalization of political parties, the right Social Revolutionaries grew in power and the moderate views led to growing support from peasants, trade unions and the middle class. In 1906 the Social Revolutionaries committed to a Revolutionary Soccalism with the major aim of returning land from big holders to the peasants. This led to great popularity in rural areas, and the breakthrough in peasant support that there forerunners The Populists could only have dreamt of. The Social Revolutionaries consequently looked more towards the peasants than other Marxist Socialist groups in Russia, who focused on Urban Workers. TheLiberals The Liberal intelligentsia pressed for change and reform but they did not adopt a revolutionary attitude like the Social Revolutionaries or Social Democrats. ? They were concerned to promote welfare, education, liberty and the rule of the law. There hope was to reform the autocracy so that the Tsar would listen directly to his people and rule in conjunction with them.? (Waller S 2009) p 64-66 Through the zemsta there was a new opportunity for liberal thinkers to air their views. Since their work brought them into constant conflict with central government activities they grew increasingly vocal in their criticisms. ? By the mid 1890?s the Liberals were growing more vociferous in their demands for a national representative body to advise the Tsarist government.? (Waller S 2009)p 64-66 The Mensheviks ...read more.