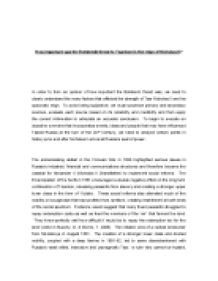 ﻿How important was the Bolshevik threat to Tsardom in the reign of Nicholas II? In order to form an opinion of how important the Bolshevik threat was, we need to clearly understand the many factors that affected the strength of Tsar Nicholas II and his autocratic reign. To avoid being subjective, we must scrutinize primary and secondary sources, evaluate each source based on its reliability and credibility and then apply the correct information to articulate an accurate conclusion. To begin to execute an objective overview that incorporates events, ideas and people that may have influenced Tsarist Russia at the turn of the 20th Century, we need to analyze certain points in history prior and after Nicholas II arrival at Russia?s seat of power. The embarrassing defeat in the Crimean War in 1856 highlighted serious issues in Russia?s industrial, financial and communications structures and therefore became the catalyst for Alexander II (Nicholas II Grandfather) to implement social reforms. The Emancipation of the Serfs in 1861 encouraged a double negative effect on the long term continuation of Tsardom, releasing peasants from slavery and creating a stronger upper lower class in the form of ?Kulaks?. These social reforms also alienated much of the nobility or bourgeoisie that had profited from serfdom, creating resentment at both ends of the social spectrum. ...read more.

Dating from the 1870?s, Populism was a revolutionary movement that drew its members from the middle and upper classes and as a result they regarded it their duty to educate the peasantry. However, the Populist Movement (Narodniki) lacked any tangible success due to peasant hostility, ?the peasants? ignorance, superstition, prejudice and deep-rooted loyalty to the Tsar ensured that by 1874, 1600 populists had been arrested? (Waller, S. 2009). The Social Revolutionaries were a descendant of the Populist Movement and as so their views were similar. They adapted far more than their predecessors and had some minor success, particularly with terrorist acts by blowing up various Ministers between 1901 and 1905. This adept means of propaganda, ?made the Social Revolutionaries seem like a party of action? (Murphy, D. & Morris, T. 2008), but this was little more than superficial bravado. Inspired by the teachings of Karl Marx, the Social Democrats wanted to create a more socially balanced society based on Marx?s Communist Theory. The Social Democratic leader George Plekhanov formed the party in 1898, but many members became disillusioned with his theoretical leadership style and wanted a more proactive approach. The foremost advocate of this approach was Vladimir Ilyich Ulyanov, also known as Lenin, ?Lenin envisaged a disciplined and dedicated group of professional revolutionaries which would act as the ?vanguard of the proletariat? (Murphy, D. ...read more.

Pyotr Stolypin became synonymous with the ?Stolypin necktie? as his fields court martial, resulted in many hangings. With the advent of the First World War, the Tsar?s already uncertain future became doomed, due to the length of the war, the millions of casualties that Russia suffered and soaring inflation. The February Revolution of 1917 became the climax of the crisis. Tsardom collapsed from within, none of the generals or politicians fought to save the regime and there was no direct effect from outside revolutionary pressure. To summarise, when Lenin returned to Russia in April 1917, Nicholas had already abdicated, after his position had become untenable and on the advice of high command generals. Lenin persuaded the masses with his ?April Theses? that built up Bolshevik membership and subsequently persuaded the Bolshevik Central Committee to take action in October 1917. The Bolsheviks were dealt a stroke of luck when Alexander Kerensky was appointed Prime Minister, as he was inept and unqualified for such a role at a pivotal time. The threat of the Bolsheviks during the reign of Tsar Nicholas II was extremely minimal. Although they were the most well prepared to seize power, the Bolsheviks were no doubt helped by a string of important events culminating in the First World War. Tsardom self imploded, greatly assisted than any other key point, by the weak and inept Tsar Nicholas II. Words count 1347. ...read more.