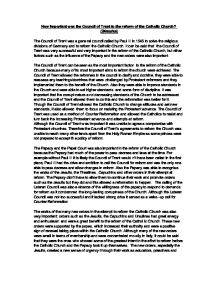 The Papacy and the Papal Court was also important in the reform of the Catholic Church because the Papacy had much of the power to pass decrees and laws at the time. For example without Paul III it is likely the Council of Trent wouldn't have been called in the first place, Paul III had the drive and ambition to call the Council for reform and was the only one able to pass decrees and allow changes in reform. Also the Papacy was able to recognise the works of the Jesuits, the Theatines, Capuchins and other orders in their attempt at reform. The Papacy didn't have to allow them to continue their work and promote orders such as the Jesuits but they did and this allowed a reformation to happen. The calling of the Lateran Council was also evidence of the willingness of the papacy to respond to demands for reform as it condemned the long-lasting corruptness of the Church. ...read more.

The new orders, especially the Jesuits, created a new sense of urgency through their work as educators, preachers and pastoral workers and they showed a clear sign that a religious revival was taking place and with their actions, set a demanding example for the Catholic Church to follow. Other factors such as the influence of the Princes and their willingness to allow acts of reform in their states/provinces were also important to the reform of the Church. Individuals and saints such as Erasmus who were able to make a significant impact with their works and inspired many New Orders and movements were also significant to the reform of the Catholic Church. In conclusion, there Council of Trent could be seen as the most important factors to the reform of the Catholic Church because it enabled the Church to reorganise themselves and find a short term and long term solution to many of the long-lasting problems of the Church. Nevertheless it could be argued that reform could have happened without a council and many other factors drove reform on. ...read more.