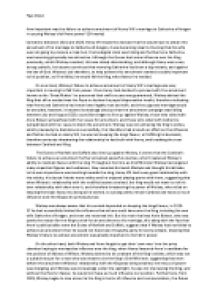 How important was the failure to achieve annulment of Henry VIIIs marriage to Catherine of Aragon in causing Wolseys fall from power?

﻿Faye Dixon How important was the failure to achieve annulment of Henry VIII?s marriage to Catherine of Aragon in causing Wolsey?s fall from power? (24 marks) Sometime between 1521 and 1525, Henry VIII made the decision that he would have to obtain the annulment of his marriage to Catherine of Aragon, it was becoming clear to the king that his wife was not going to produce a male heir, the biological clock was ticking and furthermore Catherine was becoming physically less attractive. Although the Queen had some influence over the King previously, which Wolsey resented, this was slowly deteriorating, and although Henry was a very strong catholic, he became convinced that marrying Catherine had been a big mistake, and against the law of God. Wolsey?s job therefore, to help achieve this annulment seemed crucially important to his position, as if he failed, he would fail the King, whos favour he needed. On one hand, Wolsey?s failure to achieve annulment of Henry VIII?s marriage was very important in causing his fall from power. Once Henry had decided to proceed with the annulment known as the ?Great Matter? he presumed that swift success was guaranteed, Wolsey advised the King that all ...read more.

Wolsey was always aware that his survival depended on keeping the kings favour, in 1515-27 he had successfully limited the influence that others could have over the King, including his own wife Catherine of Aragon, and even she resented this. But his main rival was Anne Boleyn, who was partly the reason for the King to wish for an annulment to his marriage, this along with the fact that Anne?s political allies were the Dukes of Norfolk and Suffolk, suggests that if Wolsey had not failed to achieve an annulment then he would not have been the guilty party for every setback, showing that Wolsey?s failure to achieve annulment was greatly important to his fall in power. On the other hand, both Wolsey and Anne fought to get their ?own men? into the privy chamber hoping to monopolise influence over the king, when Henry favoured Anne?s candidate for the position of Abbess of Wilton, Wolsey claimed to be unaware of the King?s wishes, which was not a suitable excuse for a man who was meant to be the King?s Chief Minister, suggesting that even before the annulment Wolsey?s relationship with the King was being strained, the nexus of power was ...read more.

with Henry VIII had weakened, and without a strong relationship with the king, he would find himself in a very weak position. Overall, although Wolsey?s failure to get annulment was quite important in causing his fall in power, it was not the most important issue, the Cardinal needed the trust and favour of the King to achieve anything, and without it, the King would not delegate power to Wolsey as he would first need to prove that he could achieve the King?s demands. Failure to achieve annulment was not the first time Wolsey had failed in achieving the King?s desires, the Cardinal had successfully managed to isolate England, and lose valuable monies, which subsequently weakened his relationship with Henry and lead him to be less inclined to confide in or ask Wolsey to do anything, furthermore, Wolsey became less and less popular with both society and the nobles, who Henry also needed to please, as a consequence, the King would be less likely to be as close to Wolsey in fear of society and the nobles disliking him, this may also be a reason why Henry VIII decided to distance himself from the Cardinal and delegate less power to him. ...read more.