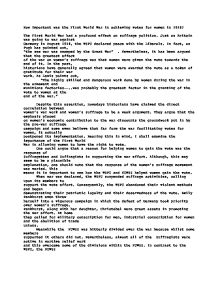 How important was the First World War in achieving votes for women in 1918?

How important was the First World War in achieving votes for women in 1918? The First World War had a profound effect on suffrage politics. Just as Britain was going to war against Germany in August 1914, the WSPU declared peace with the Liberals. In fact, as Pugh has pointed out, "the sex war was swamped by the Great War" . Nevertheless, it has been argued that the greatest effect of the war on women's suffrage was that women were given the vote towards the end of it. In the past, historians have generally agreed that women were awarded the vote as a token of gratitude for their war work. As Lewis points out, "The highly skilled and dangerous work done by women during the war in the armament and munitions factories........was probably the greatest factor in the granting of the vote to women at the end of the war." Despite this assertion, nowadays historians have claimed the direct correlation between women's war work and women's suffrage to be a weak argument. They argue that the emphasis placed on women's economic contribution to the war discounts the groundwork put in by the pre-war suffrage campaign and some even believe that far form the war facilitating votes for women, it actually postponed its implementation. ...read more.

After all, for over fifty years before the war, an all male parliament was reluctant to enfranchise women but by the end of the war, politicians had changed their minds. Reasons for the shifts occurring in government thinking between 1914 and 1918 are therefore in need of addressing. Firstly, there was a need for franchise reform in general. The existing franchise law required men who qualified as householders to have occupied a dwelling for at least a year prior to an election. Consequently, large numbers of armed forces were ineligible to vote because they no longer held or had never had a twelve month residency. Clearly this was a major problem. Therefore, in 1916, an all party conference, composed of MPs from both the House of Commons and the House of Lords presided over the Speaker of the House of Commons, was appointed to draft a proposal on the franchise and registration. This Speaker's Conference, as it was known, proved beneficial because fortunately for women, there were many supporters of women's suffrage to assure a sympathetic hearing. Nevertheless, although only a limited number of women were granted the vote because it feared that they might swamp the male electorate, over eight million women were enfranchised. ...read more.

Another point to consider is that women may well have been granted the vote if the Suffragists and Suffragettes had not campaigned so effectively before the war. This suggests that the pre-war suffrage movement prepared the ground for votes for women. In many ways, the war may have delayed the franchise rather then expedited it. Holten argues that "only two weeks before the outbreak of war, negotiations between Suffragists and government were taking place." I would have to conclude that my opinion on this question lies in favour of the synthesis view, which combines both sides to the argument. Thus I believe that in some ways the war was important in gaining votes for women, since it was a token of gratitude for war work. However, one should consider that pre war campaigns could easily have triggered the enfranchisement. Therefore, it is hard to justify how important the war was in achieving votes for women. Paula Bartley, Votes for Women:1860-1928 (Hodder & Stoughton, 1998), p88 Lewis Gifford, Eva Booth and Esther Reper (Pandora, 1988), pp.165-6 Martin Pugh, Women's Suffrage in Britain 1867-1928 (The Historical Association, 1986), p.28 Paula Bartley, Votes for Women: 1860-1928 (Hodder & Stoughton, 1998), p.99 Sandra Stanley Holton, Suffrage and Democracy (Cambridge University Press, 1986), p.125 Sreeja Nair History Key Skills Assignment ...read more.