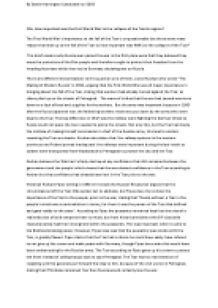 How important was the First World War to the collapse of the Tsarist regime?

﻿By Daniel Harrington Candidate no: 5093 15a. How important was the First World War to the collapse of the Tsarist regime? The First World War?s importance to the fall of the Tsar is unquestionable but there were many reason that lead up to the fall of the Tsar so how important was WW1 to the collapse of the Tsar? The brief reasons why Russia even joined the war in the first place were that they believed they were the protectors of the Slav people and therefore ought to protect their freedom from the invading Austrians which then led to Germany declaring war on Russia. There are different interpretations to this question one of them, Lionel Kochan who wrote ?The Making of Modern Russia? in 1962, arguing that the First World War was of major importance in bringing about the fall of the Tsar, stating that workers had already turned against the Tsar, as chaos piled up on the streets of Petrograd. The wave of strikes that the war had caused was more down to a lack of food and supplies for the workers. But the army was important because in 1905 after the Russo-Japanese war, the following workers revolt was put down by the army who were loyal to the Tsar. ...read more.

This would not have made her popular with politicians or solders trying to fight Germany as a new figure head. The Tsarina’s approach to rule was autocratic, and the Tsarina had encouraged Tsar Nicholas to be more autocratic than he previously had been. ‘Smash them all’ she wrote when Duma leader questioned her administration. According to Wern & Stults by the time the Tsar had left to join the front the Duma was left with honest politicians but the Tsarina and Rasputin her ‘man of God’ would change that. This claim that there were honest politicians in the Duma is quite farfetched when they were guilty of being the Tsar’s yes men, only Goremykin could not be trusted according to Wern & Stults, but the Tsarina & Rasputin would bring in Boris Sturmer as Prime Minister and Foreign Minister also they would give away the position of Minister of the interior to Craven and the almost insane Protopopov. The government from this point on would let thing drift to a point where Rasputin would be murdered by the Duma leader Purishkevitch, Grand Duke Dmitri and Prince Felix Yusopov. General Krymov reported to the Duma leaders that the army would welcome a coup d’état after the murder of Rasputin, the Grand Duke Alexander wrote ‘it is the government which is preparing the revolution. ...read more.

But in comparison, Wren & Stults state that the royals had become suspicious of their own government, whilst Richard Pipes puts the Tsars abdication down to the growing discontent amongst the Generals within the Russian Army. Kochan however believed that the government and the people didn?t understand each other and that through government action and the Tsars insistence on continuing the war food prices were driven up to an unaffordable level for most people and the ration?s that the people were given were not enough. Kochan also mentions that the Russian army were running out of ammunition which is embarrassing for a large empire like Russia?s. In conclusion a number of different factors forced the Tsar to abdicate, the fact that the Tsarina allowed Rasputin a more than questionable figure a lot of political power; the fact that the workers even the army had turned against the Tsar; the fact that the Tsar had the power to hire and fire politicians unlike in Britain where a democratically elected government ruled with the support of the Royal family, at the end of the day it was the Tsar?s inability to adapt to a changing situation within Russia cost him his crown and later in 1917 his life and that of his family. ...read more.