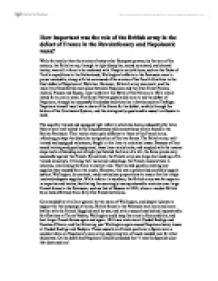 How important was the role of the British army in the defeat of France in the Revolutionary and Napoleonic wars?

How important was the role of the British army in the defeat of France in the Revolutionary and Napoleonic wars? While far smaller than the armies of many other European powers, by the turn of the century, the British army, through its tight discipline, sound command, and shrewd tactics, was still a force to be reckoned with. Despite early failures, such as the Duke of York's expeditions to the Netherlands, Wellington's efforts in the Peninsula were to prove invaluable, along with his command of the armies of the Fourth Coalition in the final defeat of Napoleon at Waterloo. However, Britain's army was small, and the majority of land battles took place between Napoleon and the other Great Powers; Austria, Prussia and Russia, most notably at the Battle of the Nations in 1813, which lasted for an entire week. The Royal Navy arguably did more to aid the defeat of Napoleon, through her successful blockades and victories in battles such as Trafalgar. ...read more.

Supplied well by sea, and with a secure base behind impenetrable fortifications at Torres Vedras, Wellington could keep his army in fine condition, and beat larger French forces again and again. 1811 saw victories at Ciudad Rodrigo and Fuentes d'Onoro, and the following year Wellington again caused Napoleon heavy losses at Ciudad Rodrigo and Badajoz. These assaults on French positions in Spain were a constant drain on Napoleon's main army, depriving him of much needed men for other objectives. On his death bed Napoleon himself conceded that 'it was the Spanish ulcer that destroyed me'. 1812 is considered by many historians to be the turning point in Napoleon's fortunes. Wellington defeated the French at Salamanca, forcing King Joseph to abdicate, while Russia turned against Napoleon, resulting in the loss of 600,000 French soldiers at the Battle of Borodino. This roused Prussia and Austria, who joined Russia in Leipzig at the Battle of the Nations in 1813, to defeat Napoleon's army. ...read more.

While making important contributions, the role of Britain's army was far from decisive in France's defeat. During the Revolutionary War, the army made little or no impact, and, but for the last year, Britain's army was active only in the Iberian Peninsula during the Napoleonic War. However, it would be a mistake to underestimate the contributions made by our land forces. When Wellington first set out in the Peninsula, Napoleon's army was regarded as well-nigh invincible by the Continental Powers, who had suffered numerous defeats at its hands. Wellington's Peninsula campaign proved to Europe that the French could be defeated on land, and, along with Napoleon's losses in Russia, inspired a rejuvenated Prussia and Austria to rejoin the battle. Waterloo, the final battle of the Napoleonic War, was fought under British command in the shape of Wellington, and with British soldiers making up the majority of the force. The highly successful Peninsula campaign dented both morale and numbers in Napoleon's army, and diverted troops needed in other areas. While the British army certainly helped in the defeat of Napoleonic France, it was by no means the decisive factor. ...read more.