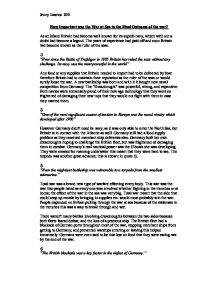 How Important was the War at Sea to the Final Outcome of the war?

How Important was the War at Sea to the Final Outcome of the war? As an Island Britain had become well known for its superb navy, which with out a doubt had become a legend. The years of experience had paid off and soon Britain had become known as the ruler of the seas. 1) "Ever since the Battle of Trafalgar in 1805 Britain has ruled the seas without any challenge. Its navy was the most powerful in the world" Any food or any supplies that Britain needed to import had to be delivered by boat therefore Britain had to maintain their reputation as the ruler of the seas or would surely loose the war. A new battleship was born and with it it bought new naval competition from Germany. The "Dreadnought" was powerful, strong, and expensive. Both navies were immensely proud of their new age technology that they were so frightened of damaging their new toys that they would not fight with them in case they marred them. ...read more.

Total war meant that the side that could keep up morale by bringing in supplies etc. would most probably win the war. People depended on Britain pulling through the war at sea because of the stalemate in the trenches this was a way to break through and win. There weren't many battles involving dreadnoughts between the two sides because both fleets feared defeat, and the loss of a precious ship. The British fleet had a blockade of German ports throughout most of the war, stopping merchant ships from getting to Germany, and prevented warships entering or leaving this helped immensely. Germans were even said to be that low on food that they were eating rats by the end of the war. 4) "The British blockade was a key factor in the defeat of Germany." 5) "Starved of supplies the German army was weakened and the German people who lost some of their will to support the war." ...read more.

this consequently lead to bad feelings towards German's in the U.S and lead to her joining the allies later in the war. By 1918, American troops arrived in Britain, and were there to aid the final attack in the same year which bought victory to the allies. The attack would not have been so successful without the new American troops help. The war at sea was a very important factor that helped Britain win the war. The war at sea was a major influence in the supplies region of the war because of the U-boats and the blockades. Probably the most important part of the war at sea was the sinking of the Lusitania. With out realising it Germany guaranteed us to win the war as our troops were tired and morale was lowering. But with the help of the fresh, eager American troops the attack was so much more successful. Taking into consideration the facts and evidence, in my view, the war at sea did help Britain win the war. Jenny Lawton 10H ...read more.