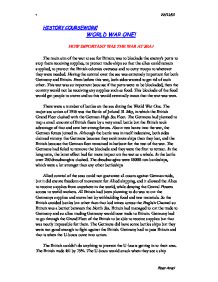 How important was the war at sea

HISTORY COURSEWORK! WORLD WAR ONE! HOW IMPORTANT WAS THE WAR AT SEA? The main aim of the war at sea for Britain; was to blockade the enemy's ports to stop them receiving supplies, to protect trade-ships so that the allies could remain supplied, to protect the British colonies overseas and to carry troops to wherever they were needed. Having the control over the sea was extremely important for both Germany and Britain. Even before this war, both sides wanted to get rid of each other. This war was so important because if the ports were to be blockaded, then the country would not be receiving any supplies such as food. This blockade of the food would get people to starve and so this would eventually mean that the war was won. There were a number of battles on the sea during the World War One. The major sea action of 1916 was the Battle of Jutland 31 May, in which the British Grand Fleet clashed with the German High Sea Fleet. The Germans had planned to trap a small amount of British fleets by a very small battle but the British took advantage of that and sent her strong forces. About two hours into the war, the German forces joined in. Although the battle was in itself indecisive, both sides claimed victory: the Germans because they sank more ships than they lost, and the British because the German fleet remained in harbour for the rest of the war. The Germans had failed to remove the blockade and they were the first to retreat. In the long term, the latter effect had far more impact on the war as a whole. In the battle over 250 dreadnoughts clashed. The dreadnoughts were 18000-ton battleships, which were a lot stronger than any other battleships Allied control of the seas could not guarantee all coasts against German raids, but it did ensure freedom of movement for Allied shipping, and it allowed the Allies to receive supplies from anywhere in the world, while denying the Central Powers access to world markets. ...read more.

The war made it impossible for Britain to import all the food it needed to survive. The was at sea has a lot to do with this and the importing of the food was made worse by the U-boat threat to all shipping around Britain. Lloyd George took a several steps to stop this crisis. Merchant ships travelling with food on their own were easy targets for the U-boats so 25% of the merchant ships bringing supplies to Britain were sunk. The navy introduced the Convoy system, merchant ships travelled in groups with an escort of Royal Navy ships to protect them. This meant that the U-boats could not attack without the risk of being sunk. So the number of sinking of the ships coming into Britain was reduced to 1%. Britain had to start rationing the food. It was voluntary at first, but it soon was mage compulsory for everyone. People were issued with coupons to hand over when they bought certain basic foods and weren't allowed to have more than their official quota for any week. There was a black market in food but no one was starving. Britain was effected from all around; the sea, the air and of course the civilians were in real danger. So thing would never be the same again.... 1500 civilians had been killed by enemy attacks, usually from the air. People in Britain now knew that they were no longer safe because they lived on an island protected by a strong navy. Britain's army was clearly too small. During the war conscription had to be introduced for the first time in Britain because of the extant of the troop loses in the Western front. The 1917 U-boat campaign meant that food supplies had run low. Lloyd George had to reorganise the Food Supply system. Rationing drove the point home to people. Newspapers and films had been censored and gave out propaganda information. ...read more.

The War in the air did not have a significant role to play in the outcome of the war compared with the war at sea. At the beginning, the planes were so simple that they were used for reconnaissance, although they were far more useful then that. (E.g. the Battle of Marne) During the war each side attempted to gain the technological advantage, but the only thing they did was to cancel each other out. Overall, World War 1 did more for the development of the planes then the planes did for the war. Despite this, however, the planes did remove the stalemate in the war and both boosted and lowered the morale. The planes, especially Zeppelins, were effective in the Home front as they lowered the morale, which Home front needed to look after and feed the other fronts. The Home Front was very important to the outcome of the war because it gave people the morale to fight on, both at Home and on Western Front. The Home Front was also important because it gave the support needed to troops. The Home Front kept the morale up at home as it gave women occupations, independence, and a chance to help the war effort on Western Front. It was also important that keeping moral up as it supplied letters, munitions, and new troops. Government aided this by using propaganda, press coverage, and censorship. The Home Front helped the war at sea by introducing rationing, which helped them to cope with German U-boat attacks. It was aiming to reduce the dependence on these ships for that the Women's Land Army encouraged people to use all available land to grow food. The Home Front also helped to develop the new aircraft and weapons. In my opinion the Home Front had the most significant impact on the outcome of the war by helping Britain in all the Fronts and keeping Britain's morale up to fight on. However, the Western front mainly contained the German actions, which could change the outcome of the war if they had succeeded. 1 22/11/01 Pinar Araci ...read more.