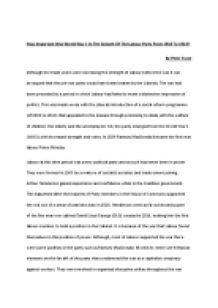 ﻿How Important Was World War 1 In The Growth Of The Labour Party From 1918 To 1924? By Peter Furze Although the trade union were increasing the strength of Labour before the war it can be argued that the pre-war party would have been beaten by the Liberals. The war had been preceded by a period in which Labour had failed to make a distinctive impression of politics. This was made worse with the Liberals introduction of a social reform programme (of 1906 to 1914) that appealed to the masses through promising to deals with the welfare of children, the elderly and the unemployed. Yet, the party emerged from the World War 1 (WW1) with increased strength and votes. In 1924 Ramsey MacDonald became the first ever labour Prime Minister. Labour at this time period was a new political party and as such had never been in power. They were formed in 1900 by a mixture of socialist societies and trade unions joining. Arthur Henderson gained experience and confidence while in the Coalition government. This happened after the majority of Party members in the House of Commons supported the war out of a sense of patriotic duty in 1914. Henderson went as far as becoming part of the five man war cabinet David Lloyd George (DLG) ...read more.

This downfall of the Liberals happened as a result of the war and as such the war greatly played to the advantage of Labour. With Labour supporting the working class it was beneficial that the 1900?s saw the emergence of trade unions as they had common aims and supporters. With ?general unionism? all types of workers were taken care of on the subject of pay and hours of work. Strikes were common, until the Taff Vale judgement was upheld in the House of Lords during a period of Conservative rule. The Liberals were also keen to side with employers on industrial disputes. It was because of this that the trade unions found Labour as ideal representation. During the war, union membership increased from 4.1 million to 6.5 million, and many more became associated with the Labour Party. In 1903 127 unions affiliated with Labour, this almost trebled membership. The consequences of this support were that theoretically Labour should have made financial gains, however because Osbourne judgement of 1909 they couldn?t until it was reversed with the Trade Union act of 1913. Trade Unions though were still a considerable strength that emerged because of the realisation that worker deserved protections as many were made to construct certain things for the war effort or fight for their country. ...read more.

From 1906 to 1913 Labour still relied on the Liberal administration heavily to get trade union laws passed. However, the younger party, Labour, wanted a new identity and so created a constitution in 1918. This included common ownership of means of production ? nationalism which was polar to the Liberals capitalist views. The confidence Henderson gained from being in cabinet was apparent in his electoral strategy of the 1924 election. Wherever, he thought Labour could win he would put a candidate up against a Liberal. That year Labour came into power with the support of the Liberals. Because of this Labour were unable to bring in any notable measures. So it could be said that Labour relied on the Liberals more than they wished due to their previous relationship and unwillingness to go into government with Conservatives. It should be said that none of the reasons should be taken to mean that the rise of the Labour Party was an inevitable process. Without the war there is no reason to suppose that the Liberals would have been divided, or that the state would move so far towards controlling society, a development that undermined the Liberal Party?s traditional defence of the individual. Labour replaced them as the voice of the masses of working class. This foundation on the bedrock of class loyalty gave strength to which Parliament could not undermine. ...read more.