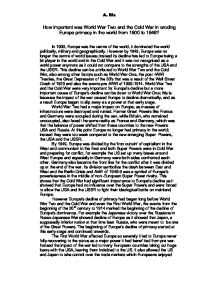 How important was World War Two and the Cold War in eroding Europe primacy in the world from 1900 to 1949?

How important was World War Two and the Cold War in eroding Europe primacy in the world from 1900 to 1949?

In 1900, Europe was the centre of the world, it dominated the world politically, military and geographically. However by 1949, Europe was no longer the centre of world issues; instead its decline has led to Europe being a bit player in the world and in the Cold War and it was not recognized as a world power anymore as it could not compare to the strengths of the USA and the USSR. This decline can be attributed to World War Two and the Cold War, also among other factors such as World War One, the post-WWI Treaties, the Great Depression of the 30’s that was a result of the Wall Street Crash of 1929 and also the events pre-WWI of 1900-1914. World War Two and the Cold War were very important for Europe’s decline but a more important cause of Europe’s decline can be down to World War One; this is because the impact of the war caused Europe to decline dramatically, and as a result Europe began to slip away as a power at that early stage.

World War Two had a major impact on Europe, as masses of infrastructure were destroyed and ruined. Former Great Powers like France and Germany were occupied during the war, while Britain, who remained unoccupied, also faced the same reality as France and Germany, which was that the balance of power shifted from these countries to the new Powers USA and Russia. At this point Europe no longer had primacy in the world; instead they were too weak compared to the new emerging Super Powers, the USA and the USSR.

By 1949, Europe was divided by the ‘iron curtain’ of capitalism in the West and communism in the East and both Super Powers were in Cold War and preparing for conflict, for example the US set up many bases around West Europe and especially in Germany were both sides confronted each other. Germany also became the front line for the conflict after it was divided up at the end of the war. Its division symbolize the clash between East and West and the Berlin Crisis and Airlift of 1948-9 was a symbol of Europe’s powerlessness in the middle of non-European Super Power rivalry. This shows that the Cold War had significant importance to Europe’s decline as it showed that Europe had no influence over the Super Powers and were forced to allow the USA and the USSR to fight their ideological battle on mainland Europe.

The First World War affected Europe so severely it led to Europe never fully recovering to the status as a major power it had benefited from pre war. Instead the impact of the war led to many European countries taking out huge loans with the USA, leaving them indebted to the US. It also allowed the US and Japan to take control over the trade markets which Europeans enjoyed for many years, which made those countries stronger and wealthier while Europe were getting poorer and this marked the beginning of the decline. It was not only the West Europe who were affected by World War One, but also the collapse of the Austria-Hungary and Ottoman empires led to formation of many new smaller states in Central and East Europe. This led to an overall decline of Europe as many of these new nations were fragile and made Europe weaken altogether.

Another factor for the decline of Europe can be the various treaties, which had an effect on the whole of Europe. The treaties all combined to weaken Europe by reducing the military size of the countries that lost, also some of the treaties forced countries to pay reparations, which in return helped to weaken Europe financially. The Treaty of Versailles’ long-term impact was to allow the rise of fascist dictators such as Hitler and Mussolini, in addition fascist dictators could be considered one of the causes of the World War Two.

Also, after the Global Depression of the early 1930s, Europe declined economically as it was only the Americans and the Soviets that concentrated on their own progress and rebuilding their economies. The USA and the USSR were the only two nations to produce economic plans – the New Deal for the USA and the 5 Year Plans for the USSR. This allowed them to strengthen and develop into superpowers and led to Europe to worsen and become more desperate, as it leads to the rise of extremism for several European countries. As a result it could be seen that Europe’s lack of action for its economies led to a deteriorating of primacy, as all leading powers need a strong economy.

In conclusion, the effects of World War Two and the Cold War were undoubtedly huge on the erosion of European primacy. World War Two had a considerable impact on European nations; bankrupting them, destroying their economies and damaging their infrastructure.  The Cold War that followed it divided Europe; therefore removing their power and causing it to form dependence on the superpowers. Although these effects were huge, they were not the major factors in the erosion of primacy. However there were events predating World War Two that showed that European decline was on the way. The effects of World War One showed that most of Europe had to rely on the USA for financial aid. Other factors such as the treaties helped to increase the decline of Europe, while the economic depression of the 1930’s showed that USA and the USSR truly became more powerful than Europe as they were the only nations who had strategies to recover from the crisis. Even before all these factors the events of 1900-1914 showed signs of Europe decline of primacy, most notably the Russo-Japanese War. Europe in 1949 was not the same Europe that dominated the world in 1900, instead it had become powerless and all influence once owned were gone at the hands of the two superpowers, leaving Europe, weak and extremely powerless. Most importantly this is due to the impact of World War One, as it from there onwards that Europe’s primacy erodes.