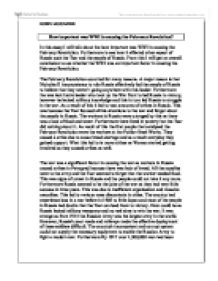 How important was WWI in causing the February Revolution?

This was due to inefficient organisation and massive casualties. This led to various mass discontents in cities. The country had experience loss in a war before in 1905 to little Japan and most of the people in Russia had doubts that the Tsar can lead them to victory. How could he as Russia lacked military weaponry and no real aims to win the war. It was strange as from 1914 the Russian Army was the largest army in the world. However, Russia's poor roads and railways made the effective deployment of these soldiers difficult. The country's incompetent and corrupt system could not supply the necessary equipment to enable the Russian Army to fight a modern war. Furthermore By 1917 over 1,300,000 men had been killed in battle, 4,200,000 wounded and 2,417,000 had been captured by the enemy. Russia could not cope financially with the war as the supplies they gave did not reach the Russian Army. ...read more.

The revolution was perfect to tackle that as Russia seemed to go backwards and backwards. In conclusion the war was a major factor of the causing of the February Revolution as there was unrest in the streets as there was lack a food for workers. The tsar seemed to forget he had to rule Russia and just totally put all his efforts on the war. But this did not come to any importance as Russia was struggling in the war and seemed doomed if it wasn't for the British and French. The Duma refuses to disband causing more problems as they didn't do much to help Russia move forward. Furthermore the increasing desertions of troops at the front which showed that Tsar did not think through the war. Moreover the incompetence of the Tsar as he was not fit to rule Russia as they were moving backwards and the war was the final straw with the Russian public as they couldn't take it anymore. Overall the war was the catalyst in causing a revolution because Russia was jus going backwards and backwards. ROBIN MOJUMDER ...read more.