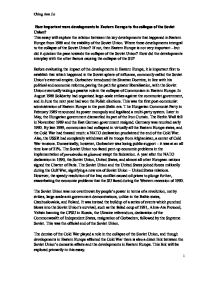 How important were developments in Eastern Europe to the collapse of the Soviet Union?

The Russians realised that the European composition of the Soviet bloc had decreased as a result of the loss of the outer empire, with an increased composition of Asiatic peoples (e.g., Muslims) in the Soviet bloc. Some Russians wanted to get rid of Central Asia republics. Ultra-nationalists went as far as calling for the shedding of all non-Russian territory in the Soviet Union. These voices were definitely heard by the Supreme Soviet, and others in power, such as Boris Yeltsin, having the effect of accelerating events leading towards the breakdown of the Soviet Union. Third, the Eastern Europe developments weakened support for Gorbachev, in the eyes of those whose actions would determine the fate of the Soviet Union, such as the bureaucracy, political opposition and the military. The conservatives criticised Gorbachev for having easily given away post-Yalta gains to the Western world (Kennedy-Pipe, 1998). This was a fundamental concession the conservatives felt had destroyed the Soviet Union's international standing and signified subservience to the United States. Coupled with other areas in which Gorbachev was criticised for, including his handling of the Soviet Union's economic situation, Gorbachev began to look like an incompetent weakling. This was important as eventually, these conservatives launched a coup in 1991 on Gorbachev, which was stopped by Boris Yeltsin. This whole political drama resulted in the finality of the political demise of Gorbachev, and helped to boost the rising popularity of Boris Yeltsin. Boris Yeltsin's influence in the affairs of the Soviet Union later was one of the precipitating factors of the Soviet Union's collapse. But was this coup primarily motivated by the loss of the Eastern Europe outer empire? ...read more.

Yet, as stated previously in the case of Lithuania and Latvia even repression can be counterproductive in silencing the masses. Gorbachev's allowing for other political parties in 1990, in effect causing the breaking of the Soviet Union's monopoly, is crucial in electing nationalist governments to the individual soviet republics of the Soviet Union, which later push for independence successfully. However, it can be argued that Gorbachev was not so much influenced by the Yugoslavs as he was to continue pushing for political openness. This landmark decision taken by Gorbachev can be viewed as just a continuation of the June 1988 radical reforms that reduced party control of the government apparatus, lessening the influence of the Eastern Europe communist collapse. Though the Soviet Union did not collapse by revolution, violent uprising, popular support of leaders moving away from the Soviet model was important in keeping these leaders in power and giving them the political will to push through initiatives, such as the Alma Ata Protocol which received widespread public support. In conclusion, the developments in Eastern Europe represent the effectiveness of the reformist policies of Gorbachev. Emphasis should be placed on these policies that are the root cause of the collapse of the Soviet Union. In that sense, the revolutions in Eastern Europe are important as providing a milestone to which the glasnost and perestroika policies have been realised (though ironically in contradiction to Gorbachev's original aims to revitalise the Soviet Union), and an indication of what was to come for the Soviet Union. These developments are not crucial as the collapse of the Soviet Union could have happened otherwise anyway. However their role is not merely symbolic - Eastern Europe quickens the pace of events by strengthening nationalistic movements and weakening the will and ability of those in power. ...read more.