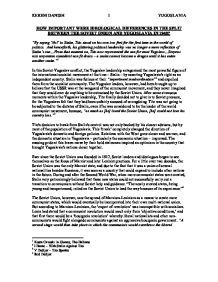 How important were ideological differences in the split between the Soviet Union and Yugoslavia in 1948?

HOW IMPORTANT WERE IDEOLOGICAL DIFFERENCES IN THE SPLIT BETWEEN THE SOVIET UNION AND YUGOSLAVIA IN 1948? "By saying 'No!' to Stalin, Tito stood on his own two feet for the first time in the world of politics. And henceforth, his glittering political leadership was no longer a mere reflection of Stalin's sun...From that moment on, Tito now represented the sun for most Yugolavs...Serpens nisi serpentem comederit non fit draco - a snake cannot become a dragon until it has eaten another snake."1 In this Soviet-Yugoslav conflict, the Yugoslav leadership antagonised the most powerful figure of the international socialist movement at the time - Stalin - by asserting Yugoslavia's right as an independent country. Stalin was furious at their "impertinent insubordination"2 and expelled them from the socialist community. The Yugoslav leaders, however, had been brought up to believe that the USSR was at the vanguard of the communist movement, and they never imagined that they would ever do anything to be ostracised by the Soviet Union. After some strenuous moments within the Yugoslav leadership, Tito finally decided not to give in to Soviet pressure, for the Yugoslavs felt that they had been unfairly accused of wrongdoing. Tito was not going to be subjected to the dictates of Stalin, even if he was considered to be the leader of the world communist movement, because, "as much as [he] loved the Soviet Union, [he] could not love his country less."3 Tito's decision to break from Stalin's control was not only backed by his closest advisers, but by most of the population of Yugoslavia. ...read more.

The Yugoslavs realised that this was a means for the Soviets to gradually assume control of their economy. The Soviets wanted to create these joint-stock companies in such sectors of production as steel, iron, and non-ferrous metals. Their real intention was to prevent Yugoslavia's industrialisation by extracting raw materials from it through these companies. The Yugoslavs rejected all the proposals. The Soviets also proposed a plan for a joint-stock bank, which in reality would have been a Soviet agency on Yugoslav soil. The bank would have given the Soviets access to the Yugoslav central financing and credit allocations. Much to the Soviet's anger, the Yugoslav leadership also rejected this proposal. The two sides only agreed upon the creation of a joint air transportation company and a joint river shipping company. The new airline called 'Justa' took over all the major air routes to and from Yugoslavia, relegating the state carrier JAT (Jugoslovenski AeroTransport) to a secondary role. The river shipping company 'Juspad' was equally as exploitative, because the Soviets appropriated Yugoslav vessels and used their shipyards without contributing a single ship. The Yugoslavs protested, but Stalin tried to assuage their complaints with the promise of a huge credit for capital goods, a promise that never saw itself come true. Aside from economic issues, Stalin was very annoyed at Yugoslavia's efforts to establish good relations with other Balkan countries, especially with those that had fought alongside the Axis powers during World War Two. ...read more.

In January 1949, Yugoslavia even applied to join the Council for Mutual Economic Aid (CMEA). Stalin turned Yugoslavia's application down. The Soviet Union directed its satellite countries to take part in an economic blockade of Yugoslavia. On July 1, 1948, Albania already terminated economic relations with its northern neighbour. By the autumn, all the Soviet bloc countries removed their trade agreements with Yugoslavia. In January 1949 Moscow told Belgrade that its capital goods agreement was no longer valid because "conditions had changed."14 This gravely affected the Yugoslav economy because the 5-Year Plan was in progress, and the sudden stop of the deliveries of machinery and fertilisers from the Soviet Union hampered the attempts for a successful collectivisation of agriculture. "In sum, a raw struggle for political power in Yugoslavia lay at the bottom of the Tito - Stalin split."15 However, According to Yugoslav testimony, ideological differences "played no significant role."16 From the evidence, it seems that they have a case, from the issue of Soviet interference to the coercion of the Yugoslav press and the economic factors including the wish to break away from economic deals with Russia. However, this could be a great disguise; a method by which Tito can pursue his ideology, one which Stalin did not approve of or trusted. Tito himself led this ideological attack against Stalin because he had lived the interwar years when the Soviet Union was the only socialist state in the world, and all eyes looked towards Moscow for guidance and support. ...read more.