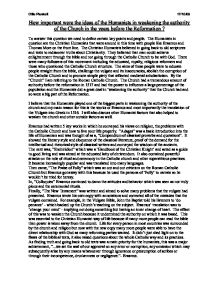 How important were the ideas of the Humanists in weakening the authority of the Church in the years before the Reformation?

How important were the ideas of the Humanists in weakening the authority of the Church in the years before the Reformation ? To answer this question we need to define certain key points and people. The Humanists in question are the Christian Humanists that were around in this time with people like Erasmus and Thomas More on the front line. The Christian Humanists believed in going back to old scriptures and texts to rediscover truths about Christianity. They believed that man could achieve enlightenment through the bible and not going through the Catholic Church to be with God. There were many followers of this movement including the educated, royalty, religious reformers and those who questioned the Catholic Church structure. The aims of these people were to educate people straight from the bible, challenge the vulgate and its inaccuracies, abolish the corruption of the Catholic Church and to promote simple piety that reflected medieval scholasticism. By the "Church" I am referring to the Roman Catholic Church. The Church had a tremendous amount of authority before the reformation in 1517 and had the power to influence a large percentage of the population and the Humanists did a great deal in 'weakening the authority' that the Church had and so were a big part of the Reformation. I believe that the Humanists played one of the biggest parts in weakening the authority of the church and my main reason for this is the works or Erasmus and most importantly the translation of the Vulgate into Greek in 1516. ...read more.

The text claims that the Donation was Constantine's gift to Sylvester for instructing him in the Christian faith, baptizing him and miraculously curing him of leprosy. As this was found out to be a fraud big questions started to arise about the legitimacy of the church. The Church therefore should not have the power that it has in 1516 and this spurred ongoing investigations into the corruption of the church. Continuing from above, there were continued questions about the corruption inside the church and although the humanists weren't responsible directly for the criticizing they did join in. The big abuses were simony, pluralism and absenteeism. Simony was the buying and selling of church positions (benefices), pluralism was the holding of more than one benefice and leading on from that was absenteeism which was when a person did not reside in the diocese that they owned. Examples of people who suffered from all of these abuses are, the Archbishop of Sens, Albert the Archbishop of Mainz and probably the most well known Cardinal Wolsey. Among the higher clergy it wasn't uncommon to have large houses, paintings, servants, fine food and a family. There were also monasteries and convents that were cashing in from the ability to work the land, produce food and wool and live a generally anticlerical life. There was also whats known as Renaissance Popes like Leo X who was educated by humanist teachers and loved the arts and syphoned funds for the Sistine Chapel in the Vatican. ...read more.

In conclusion it is necessary to look back at the question posed and summarize the key points of the humanist ideas that weakened the authority of the church in the years before the reformation. The most important reason were the works of Erasmus and especially his new testament. This helped with one of the important aspects of humanist teachings to be closer to God with personal piety and not going directly through the Catholic Church to find salvation. The finding that the Donation of Constance was a fake was a big blow to the church and gave the humanists ammo to attack with and use to show how the church was a fraud and corrupt. The church was corrupt anyway with so many higher clergy committing abuses, many lower clergy weren't fit for the job and the Renaissance Popes just had a good time and not tending to the appropriate godly activities. The printing press was the platform that gave humanism and many other religious sects the ability to share their ideas and thoughts and without it could never have got as far as they did. Then at last there are the missed chances of the church to reform early on and avoid the storm that they had to deal with in the years following. If they had only heeded the warnings given by Erasmus and other scholars then maybe the world would be shaped very differently to how it is today. Ollie Plunkett 17/10/09 Ollie Plunkett 17/10/09 ...read more.