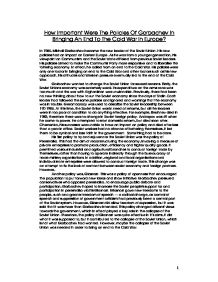 How Important Were The Policies Of Gorbachev In Bringing An End To The Cold War In Europe?

How Important Were The Policies Of Gorbachev In Bringing An End To The Cold War In Europe? In 1985, Mikhail Gorbachev became the new leader of the Soviet Union. His new policies had an impact on Eastern Europe. As he was from a younger generation, his viewpoint on Communism and the Soviet state differed from previous Soviet leaders. His policies aimed to make the Communist Party more responsive and to liberalise the faltering economy. In effect, he called from an end to the Cold War. His policies were only one factor in bringing an end to the Cold War and other factors such as his new approach, his attitudes and Western pressure eventually led to the end of the Cold War. Gorbachev wanted to change the Soviet Union for several reasons. Firstly, the Soviet Unions economy was extremely weak. Its expenditure on the arms race was too much and the war with Afghanistan was unwinnable. Previously, there had been no new thinking about how to run the Soviet economy since the days of Stalin. Each leader had followed the same policies and ignored and warnings that the economy was in trouble. Gerontocracy was used to describe the Soviet leadership between 190-1985. ...read more.

Although not directly a great factor in bringing an end to the Cold War, it is still a considerable factor. It didn't straight away contribute to ending the Cold War; it allowed the first seeds to be planted in order for the Cold War to thaw. Another factor, which led to the end of the Cold War, was when the Soviet troops were withdrawn from Afghanistan. This had been draining Soviet resources and money and it was simply unwinnable. Over 15,000 Red Army soldiers were killed in the war, costing $8 billion per year. Supporting communist regimes in Cuba and Vietnam had again drained Soviet resources. The USSR had spent $40 billion annually constructing communist governments throughout the world. This was a waste; the money could have been used to promote domestic reform. This new political thinking led to warming relations with the West. A summit between President Reagan of America and Gorbachev was arranged in Geneva, November 1985. Although little was decided at the summit, it instead established a connection and rapport between the two leaders. Even though Reagan hated the Soviets, he liked Gorbachev. As a result, Gorbachev, realising they were fast losing in the Arms Race, proposed nuclear disarmament which took the USA by surprise. ...read more.

In conclusion, Gorbachev played an important role in ending the Cold War. His policies of openness and reconstruction in terms of Perestroika and Glasnost helped the economy of the Soviet Union, helping numerous lives and improving lifestyles. However, his policies also contributed greatly to the end of the Soviet Union. However, Gorbachev was important in the fact that he realised in his thinking that the Cold War was pointless; it was no longer worth fighting for. In effect, it seems for the Cold War to come to an end, the USSR Empire had to be eradicated, which it was. It wasn't able to sustain the resources needed to keep their empire, such as keeping up the arms race of fighting the war in Afghanistan. The Cold War was all about conflicting ideologies. Therefore, if one ideology collapsed - Communism from the Soviet Union, then there was no more competition and there was no more point of a Cold War. Gorbachev's policies in effect led to the collapse of Communism, therefore he inadvertedly led to the end of the Cold War. His policies were important as they led to the collapse of Communism, but instead, new political thinking, such as ending the arms race, nuclear disarmament, abandoning Communism in Eastern Europe and extending hands of friendships were more important in bringing an end to the Cold War. 1 ...read more.