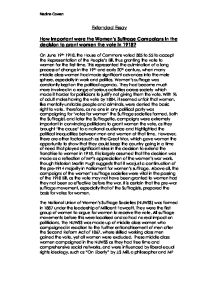 How important were the Women's Suffrage Campaigns in the decision ot grant women the vote in 1918?

Extended Essay How important were the Women's Suffrage Campaigns in the decision to grant women the vote in 1918? On June 19th 1918, the House of Commons voted 385 to 55 to accept the Representation of the People's Bill, thus granting the vote to women for the first time. This represented the culmination of a long process of change in the 19th and early 20th century, when many middle class women had made significant advances into the male sphere, especially in work and politics. Women's suffrage was constantly kept on the political agenda. They had become much more involved in a range of serious activities across society which made it harder for politicians to justify not giving them the vote. With ? of adult males having the vote by 1884, it seemed unfair that women, like mentally unstable people and criminals, were denied the basic right to vote. Therefore, as no one in any political party was campaigning for 'votes for women' the Suffrage societies formed. Both the Suffragist, and later the Suffragette, campaigns were extremely important in convincing politicians to grant women the vote, as they brought 'the cause' to a national audience and highlighted the political inequalities between men and women at that time. However, there are other factors such as the Great War, which gave women the opportunity to show that they could keep the country going in a time of need that played significant roles in the decision to extend the franchise to women in 1918. It is largely assumed that the decision was made as a reflection of MP's appreciation of the women's war work, though historian Martin Pugh suggests that it was just a continuation of the pre-1914 majority in Parliament for women's suffrage. Above all, the campaigns of the women's suffrage societies were vital in the passing of the 1918 Bill, as the vote may not have been granted to women had they not been so effective before the war. ...read more.

These factors all seemed to prove that the militant approach did not work, and when Sylvia was kicked out of the WSPU in 1913, it was regarded that the Suffragette movement was too radical and aggressive by many. Their tactics angered politicians, who claimed that they showed women to be untrustworthy and unworthy of the vote. MP's thought that these women were mentally unstable and so were not in a suitable state of mind to vote sensibly. When Asquith agreed to meet in June 1914, he only met with the East London branch of Suffragettes. At this meeting, he agreed that it would be unjustified to grant limited suffrage to women with unlimited suffrage to men. This suggested a willingness to accept women's suffrage if it was part of a broader scheme. Yet, he did not meet with all Suffrage organisations. Suffragette militancy took the cause to the attention of the whole country. For example, the Cat and Mouse Act of 1913, which was passed as hunger strikes were making the Suffragette prisoners ill, so they were sent home from prison to recover, then ordered back to serve their full sentence, allowed the whole nation to see how serious these women were about the cause, and at what lengths they would go to, to get their point across. Britain's awareness was further raised when Emily Davidson ran out in front of the King's horse at the Derby in 1912, subsequently killing herself. She was perceived by some as a martyr to the cause, but mainly as a fringe lunatic, as the WSPU didn't even know of her plan. In addition, the Suffragettes proved to politicians that they were responsible and dedicated to helping the nation when they ceased their campaign when war broke out in 1914. During the late 19th and early 20th century, women were advancing in the workplace, being employed as secretaries and typists, working in offices or shops and even as teachers in schools. ...read more.

The Board's President urged the Cabinet to agree to this as it would prevent any further radical activities. Fawcett was critical to this also, as she persuaded the Suffrage societies to accept the agreement. The Speakers Conference was very important, as it indicates the importance of the Suffragist campaign. Gradually, the traditional perceptions that a woman's role in society was to cook, clean and to look after their children, was eroded and generations of men, women and politicians witnessed the growing influence of women. These made the common male argument that women shouldn't get the vote appear illogical. After 1918, this reason became less and less sensible, and there was little serious opposition to the 1928 Bill giving the vote to all women over 21, which was never in danger of being defeated. The changing social and political status of women before 1914, however, can be considered as the biggest impact in the decision to give women the vote, as it helped to create a political conscience on 'votes for women' and reinforced the Suffragist message, even though the majority of the public weren't in favour of women getting the vote. Overall, the Women's Suffrage campaigns had very significant importance in the decision to grant women the vote in 1918 because they demonstrated that women were not just housewives of less importance than their husbands and who were of no use, and that they were smart and determined people who had a dedicated desire for society to change to include women more. The Great War was important as it proved that women were more skilled that originally thought and gave politicians the chance to recognise this, but postponed the decision to give women the vote. However, without changing social and economic status of women before the Great War, it can be assumed that Britain's people would never have supported women's suffrage and thus the vote may not have been granted to women by 1918. ?? ?? ?? ?? Nadine Cowan ...read more.