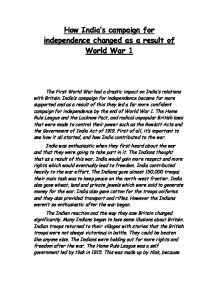 How India's campaign for independence changed as a result of World War 1.

Many Indians began to lose some illusions about Britain. Indian troops returned to their villages with stories that the British troops were not always victorious in battle. They could be beaten like anyone else. The Indians were holding out for more rights and freedom after the war. The Home Rule League was a self government led by tilak in 1915. This was made up by tilak, because he wanted to make another political party to go head to head against the British party. The Lucknow Pact was an alliance between Hindu's and the Muslim. They joined together because it would have made them stronger. The British weren't very happy with what was happening. The British weren't happy about what was happening at all. ...read more.

There was an increasing amount of unrest in India at the time. The British could detain people without trial. The Rowlatt Acts were continued from the Defence of India Act. These were important factors that happened during the war. These were all very important stages in the build up for India's campaign for independence. The changes and the development for the campaign were largely significant in 1 way or another. The reaction of the Indian's changed significantly from when the war started when they were enthusiastic and when the British introduced new laws the Indian's were furious. The Indian's were given more rights and more say but Indian's were at a point where they said that was not enough for them and that they wanted complete freedom. The Indian's were determined to get Home Rule. ...read more.