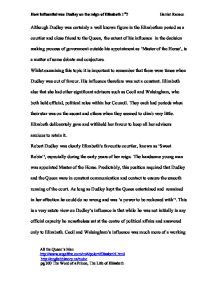 How influential was Dudley on the reign of Elizabeth 1st

Although Dudley was certainly a well known figure in the Elizabethan period as a courtier and close friend to the Queen, the extent of his influence in the decision making process of government outside his appointment as 'Master of the Horse', is a matter of some debate and conjecture. Whilst examining this topic it is important to remember that there were times when Dudley was out of favour. His influence therefore was not a constant. Elizabeth also that she had other significant advisors such as Cecil and Walsingham, who both held official, political roles within her Council. They each had periods when their star was on the ascent and others when they seemed to climb very little. Elizabeth deliberately gave and withheld her favour to keep all her advisors anxious to retain it. Robert Dudley was clearly Elizabeth's favourite courtier, known as 'Sweet Robin'�, especially during the early years of her reign. The handsome young man was appointed Master of the Horse. Predictably, this position required that Dudley and the Queen were in constant communication and contact to ensure the smooth running of the court. As long as Dudley kept the Queen entertained and remained in her affection he could do no wrong and was 'a power to be reckoned with'�. This is a very astute view on Dudley's influence in that while he was not initially in any official capacity he nonetheless sat at the centre of political affairs and answered only to Elizabeth. ...read more.

She realized the importance of securing the cooperation of powerful men in order to rule effectively. She made extensive use of the Privy Council and summoned ten parliaments during her reign. William Cecil was a massive influence upon Elizabeth in this section of her government. He continued to sit in Parliament, as he had done under Mary, as a commoner until 1571 and as Lord Burghley thereafter, and was Elizabeth's chief spokesman there, as well as administrative head of her government. One of his greatest skills was his ability to function as a liaison, representing royal policy to Parliament and keeping Elizabeth in touch with its feelings. Whilst Elizabeth and he had a very companionable, functional relationship he realised the truth in the words spoken to him by De Feria in 1559 'She is a very vain and clever woman. She must have been thoroughly schooled in the manner in which her father conducted his affairs. She is determined to be governed by no one.' This is perhaps one of the reasons he had so much authority with the Queen, in that he did not try to dictate or demand unlike the Howards who assumed she would be a biddable puppet Queen to their government. Although Elizabeth's favourites often opposed Burghley's influence, his role as chief adviser was never seriously challenged. His first major diplomatic achievement was to persuade a reluctant queen to intervene in Scotland and conclude the Treaty of Edinburgh (1560), which removed French forces from Scotland. ...read more.

Upon the approach of the Spanish Armada, 1588, Leicester was appointed captain general of the armies, but died before he could take his post. Cecil and Walsingham had a continual good relationship with Elizabeth which enabled them to be constantly influencing her in her decisions concerning England's government. Dudley appears to believed that he had more power than he actually did and it is a credit to Elizabeth's shrewdness that she used his affection for her to help improve her decisions instead of allowing him to take too much control. Her decision not to marry Dudley although many of her courtiers and close friends believed her to be deeply in love with him is another example of how limited his influence on her actually was. She knew that it was not politically advantageous to marry him and consequently kept him and her other suitors at arms length whilst continuing to make them believe she would chose one. As a statesman Cecil saw that his duty was to give the Queen his best advice and then to carry out whatever policy seemed expedient to her. His loyalty in this task won Elizabeth's confidence. A master of discretion, Cecil as a royal servant assumed an official mask and learned 'to walk invisible.' His contribution to policy-making was his intuitive appreciation of the national interest, which he strove to convey to the Queen. ?? ?? ?? ?? How influential was Dudley on the reign of Elizabeth 1st? Harriet Ranson All the Queen's Men http://www.angelfire.com/mi4/polcrt/ElizabethI.html http://englishhistory.ne/tudor pg 300 The Word of a Prince, The Life of Elizabeth ...read more.