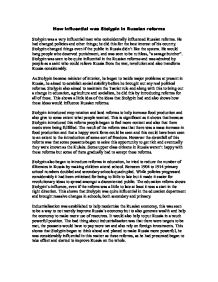 How influential was Stolypin in Russian reforms

How influential was Stolypin in Russian reforms Stolypin was a very influential man who coincidentally influenced Russian reforms. He had changed policies and other things; he did this for the best interest of his country. Stolypin changed things even if the public in Russia didn't like the system. He would hang people who deserved punishment, and was seen to be ruthless, "a savage butcher". Stolypin was seen to be quite influential in the Russian reforms and was admired by people as a saint who could relieve Russia from the war, revolution and also transform Russia considerably. As Stolypin became minister of interior, he began to tackle major problems at present in Russia, he aimed to establish social stability before he brought out any real political reforms. Stolypin also aimed to maintain the Tsarist rule and along with this to bring out a change in education, agriculture and socialism, he did this by introducing reforms for all of these. This shows a little idea of the ideas that Stolypin had and also shows how these ideas would influence Russian reforms. ...read more.

While policies progressed considerably it had been criticised for being to little to late but it made it easier for revolutionary ideas to spread amongst a discontented public. The education reform shows Stolypin's influence, even if the reform was a little to late at least it was a start in the right direction. This shows that Stolypin was quite influential in the education department and brought massive changes in schools, both secondary and primary. Industrialisation was established to help modernise the Russian economy, this was seen to be a way to not merely improve Russia's economy but to also generate wealth and help the economy to make more use of resources. It would also help to put Russia in a much powerful position. The bad thing about industrialisation was that there were targets to be met, the peasants would have to pay more tax and also rely on foreign investments. This shows that Stolypin began to think ahead and planed to make Russia more powerful, he was considerably influential in this matter as these reforms, as he had presumed began to take effect and started to improve Russia on the whole. ...read more.

Later on Stolypin offered improvements for the Duma, in reforms to improve workers condition and civil rights. This was rejected again by the Duma, who did not cooperate, Stolypin then had to introduce new rules which would make the Duma cooperate. This shows that Stolypin didn't give up in finding the cooperation of the Duma, he changed rules to gain the cooperation of the Duma. This shows that Stolypin was very influential. Stolypin believed that the Duma would help him achieve his aims of reforming Russia and accepted that the only way that this would happen is with the assistance of the Duma. He believed that he was the solution to Russia's problems. Finally we can see that Stolypin was substantially influential in helping Russia to reform. To some extent he did reform Russia in major areas, where she needed help for example: politically, agricultural, industrial, education and so fourth. Stolypin was seen to be a ruthless figure that brought Russia on the verge of reforming her. Even thought Stolypin used the Okhrana to get his point across and to execute people, he was still seen as the saint who was given time to change Russia for the good. ...read more.