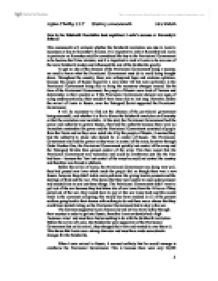 How is the Bolshevik Revolution best explained: Lenin's success or Kerensky's failure?

Kerensky was a SR, this meant that he wanted to give land to the peasants. However, he went back on his promise and did not share out the land, this is because he had to work with a coalition of unwilling landowners. The minister of agriculture, Victor Chernov's criticism of the Provisional Government helped Lenin. Lenin changed his view from the government should keep the land for the country's own good to 'land to the peasants', even though it was against Marxist ideology. He even went into the army and encouraged officers and soldiers to go back home and to seize their own land, this weakened the army and made hunger and land seem more important than fighting the war. Kerensky's failure to work with his own government, gave Lenin the opportunity to manipulate the failure in order to help himself and the Bolsheviks as well as hindering Kerensky's support in and outside the Provisional Government. During the summer of 1917, there were two main events that show the Provisional Government losing support and Lenin's luck and skill at exploiting mistakes made by Kerensky. These two events were the July days and the Kornilov revolt. The July days show that 100,000 people in St Petersburg did not respect the government as they were taking part in a demonstration but it also shows that there were approximately 2 million people in St Petersburg that supported the Provisional Government as the Bolsheviks failed to seize power. ...read more.

women and cadets. This was a major failure for Kerensky as he could no longer keep the war effort going. Kerensky failed to make good political decisions. He was as 'out of touch' as the Tsar when he tried to order the garrison the front line. Whereas Lenin used all of his powers of persuasion to make the Bolsheviks stage the coup. Therefore, the takeover succeeded because the Provisional Government had not delivered all of its promises or fulfilled the people's hopes. The people became apathetic of what he did. Kerensky also had left the capital which is a key error as it became very difficult to reclaim it. The Bolsheviks succeeded because they planned a surprise coup and took over key positions in the city. The Bolsheviks used Lenin's leadership and persuasive powers to the fullest extent. They were also able to control most of the army in the capital. This was very successful for Lenin as the takeover succeeded and a failure for Kerensky as the Provisional Government was no longer in control. I think that the Bolshevik revolution is best explained by mostly Lenin's successes because he was able to act quickly and decisively when necessary, he was able to exploit the Provisional Governments weaknesses and could exploit dissatisfied demonstrators to his advantage. But partly Kerensky's failure because Lenin was always able to exploit the situation and make it favour himself and the Bolsheviks and Kerensky made the mistake of appointing Kornilov, as his revolt in August armed the Bolsheviks and restored their reputation. Arjan Thethy 11.T History coursework Mrs Welch 1 ...read more.