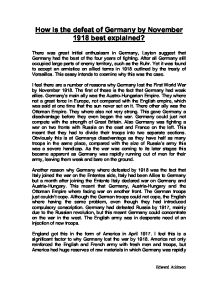 How is the defeat of Germany by November 1918 best explained

How is the defeat of Germany by November 1918 best explained? There was great initial enthusiasm in Germany, Layton suggest that Germany had the best of the four years of fighting. After all Germany still occupied large parts of enemy territory, such as the Ruhr. Yet it was found to accept an armistice on allied terms in 1918 outlined by the treaty of Versailles. This essay intends to examine why this was the case. I feel there are a number of reasons why Germany lost the First World War by November 1918. The first of these is the fact that Germany had weak allies. Germany's main ally was the Austro-Hungarian Empire. They where not a great force in Europe, not compared with the English empire, which was said at one time that the sun never set on it. There other ally was the Ottoman Empire. They where also not very strong. This gave Germany a disadvantage before they even began the war. Germany could just not compete with the strength of Great Britain. Also Germany was fighting a war on two fronts with Russia on the east and France on the left. ...read more.

England got this in the form of America in April 1917. I feel this is a significant factor to why Germany lost the war by 1918. America not only reinforced the English and French army with fresh men and troops, but America had huge reserves of raw materials in which Germany was rapidly running out of. Also the involvement of America in the war made Germany act quickly and hastily causing them to rush into bad decisions and inevitably the wrong decisions. That leads me on to the Schlieffen plan and more importantly the failure of it. The longer the war was to go on there was more of an advantage to Germany's enemy's as they had much stronger economy's. Germany, lead by Wilhelm II, devised the Schlieffen plan, which was that they beat the French in six weeks, before Russia had time to mobilize, so they would not be fighting war on two fronts. This obviously failed and lead Germany into war on two fronts, which they where economically and militarily unprepared. Another important factor is the English blockade on Germany. ...read more.

This on top of Germany's lack of empire led to the collapse of the German army and the loss of the war on the 11th November 1918. You could say that Germany where fighting an uphill struggle from the very beginning, with Germany not having an empire of any sort in which to turn to for raw materials and military strength. After the failure of the Schlieffen plan Germany had war on two fronts making it almost impossible for them to overcome the powers of the British Empire. On top of this you add the fact that there was a naval blockade in which Germany could not use the sea as a method of transportation for ammunition or food etc. It was almost inevitable that Germany where going to lose the war, with the introduction of America in April 1917. This made Germany panic and launch their final offensive, which was counteracted by Great Britain, and Germany where finally defeated. I feel the three main causes of the defeat of Germany where, the British naval blockade, the introduction of America and most importantly the failure of the Schlieffen plan. ?? ?? ?? ?? Edward Atkinson ...read more.