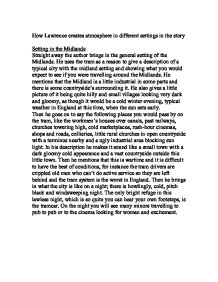 How Lawrence creates atmosphere in different settings in the story

How Lawrence creates atmosphere in different settings in the story Setting in the Midlands Straight away the author brings in the general setting of the Midlands. He uses the tram as a reason to give a description of a typical city with the midland setting and showing what you would expect to see if you were travelling around the Midlands. He mentions that the Midland is a little industrial in some parts and there is some countryside's surrounding it. He also gives a little picture of it being quite hilly and small villages looking very dark and gloomy, as though it would be a cold winter evening, typical weather in England at this time, when the sun sets early. Then he goes on to say the following places you would pass by on the tram, like the workmen's houses over canals, past ...read more.

On the night you will see many minors travelling to pub to pub or to the cinema looking for woman and excitement. The Status far He starts of by talking about some of the fairs in the fairground and giving a description of what they were like. He describes the roundabouts, which was veering round and grinding out music. The side-shows were making commotion. In the coconut shies there were no coconuts but substitutes for wartime. Then he mentions what it would be like to be at the status fair it was no luxury the ground was muddy and you can smell naphtha and patatoes. Electric light and flares would give a bright appearance. You could the level of description he puts into the fairs making it so you can imagine a dark cold night but a shiny bright light in one area which would be the fair ground. ...read more.

The room was in a rough condition but cosy unlike the rest of the depot, which is like an open garage. Then he says that the girls didn't go home but sat around the fire in the waiting room. Then he gives a brief say what it is like outside the depot. He says that outside the depot it was cold pitch dark and looked lawless because of wartime. Lawrence basically described the setting of night-time in the Midland, The Status fair and The Depot. He gives you a little insight to the fairs, which is bright and lots of people and outside this area he uses the same paragraph about night-time as he did in the description about the Midlands. Then he says what the depot is like and the waiting room inside it and then again he repeats his description of the Midlands at night-time. ...read more.