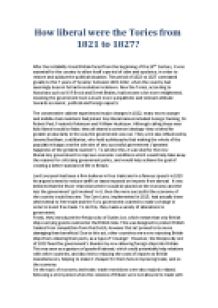 ﻿How liberal were the Tories from 1821 to 1827? After the instability Great Britain faced from the beginning of the 18th Century, it was essential for the country to allow itself a period of calm and opulence, in order to restore and subdue the political situation. The period of 1822 to 1827 contrasted greatly to the 7 years of ?tyranny? between 1815-1822, when the country had seemingly been in full anti-revolution lockdown. Now the Tories, according to historians such as W.R Brock and Derek Beales, had become a lot more enlightened, meaning the government took a much more sympathetic and tolerant attitude towards economic, political and foreign aspects. The conservative cabinet experienced major changes in 1822; many more younger and middle-class members had joined. Key liberal names included George Canning, Sir Robert Peel, Frederick Robinson and William Huskisson. Although calling these men fully liberal would be false, they all shared a common ideology- they wished for greater productivity in the way the government was run. They were also influenced by Jeremy Bentham, a utilitarian, who held a philosophy that making the whole of the population happy was the sole aim of any successful government (?greatest happiness of the greatest number?). To achieve this, it was vital for the new liberal-tory government to improve economic conditions which would help take away the reasons for criticising government policy, and would help achieve the goal of creating a better standard of life in Britain. Lord Liverpool had been a firm believer in free trade and in a famous speech in 1820 he argued a need to reduce tariffs or taxes imposed on imports from abroad. ...read more.

organisation, helps demonstrate how liberal the Tories had become, because they, as a right wing party, were helping members of society who, on the whole were left wing, which shows the significance of the government's adjustment, even more so that just 25 years previously it looked as though trade unions had disintegrated for good. The Penal Code, a list containing the appropriate punishment for a variety of different crimes was also reformed between 1825 and 1828. There were hundreds of offences which carried the death penalty for extremely petty things. If the country was to evolve properly in a civilised manner, it was high time for Peel to recognize this and make Britain break away from customs which would have been suitable 3 or 4 centuries ago. By reforming 278 laws and also abolishing the death penalty for over 120 offences, Peel successfully managed transform the outdated system. This was essential, as a society handing out death penalties for tiny crimes is the complete opposite of liberalism. The Goals Act was passed in 1823, which meant that the previously almost uninhabitable jails in Britain that prisoners had to endure were at least partially improved. Gaolers, men who manned the jails, were also able for the first time to receive a salary and inmates received a basic education. Numbers of gaols, or jails as they are today known, also increased, as Peel made it mandatory for all large towns to have at least one of them. ...read more.

For instance, the Amending Act showed that acts that seemed pro-liberal were restricted and largely suppressed the government was not as liberal as they first appeared Also, the fact that all 'enlightened men' at office during the supposed time of liberalism had also been in office during the anti-revolutionary years, and so questions are inevitably asked on how liberal they really were if they were part of a government which restrained its people so much in the late 18th Century and early 19th Century. It can too be argued that it was not only post-1821 which saw a change in the liberalism of the country, the period before 1821 was said to also be liberal to an extent ( the implementation of the Factory Act and Truck Act for example), and that the government of 1821 onwards was merely continuing the tone that had been set earlier on. Finally, the refusal of Peel to allow electoral reform so that the vote could be widened, and his decision to reject Catholic emancipation typifies the shortcomings of the Tory government's liberal image. No country can truly become truly liberal or enlightened if the government refuses the right of the vote to ordinary people(which equated to the vast majority of the population at the time) and rejects the basic human right of political activity to people of a different faith. All in all, although some of actions of the Tories between 1821 and 1827 indeed positively contributed to the liberalisation of Britain during the 19th Century, there were various factors which demonstrated that the degree to which the government was liberal was certainly boundaried and confined. ...read more.