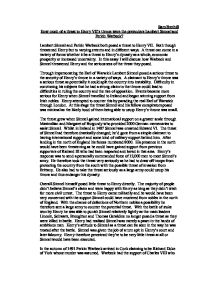 How much of a threat to Henry VII&amp;#146;s throne were the pretenders Lambert Simnel and PerkinWarbeck?

Sam Brothill How much of a threat to Henry VII's throne were the pretenders Lambert Simnel and Perkin Warbeck? Lambert Simnel and Perkin Warbeck both posed a threat to Henry VII. Both though threatened Henry but to varying extents and in different ways. A threat can come in a variety of forms whether it be a threat to Henry's dynasty as a whole, economic prosperity or increased uncertainty. In this essay I will discuss how Warbeck and Simnel threatened Henry and the seriousness of the threat they posed. Through impersonating the Earl of Warwick Lambert Simnel posed a serious threat to the security of Henry's throne in a variety of ways. A claimant to Henry's throne was a serious threat as potentially it could split the country into instability. Difficulty in convincing his subjects that he had a strong claim to the throne could lead to difficulties in ruling the country and the rise of opposition. Events became more serious for Henry when Simnel travelled to Ireland and began winning support from Irish nobles. ...read more.

With the chance of defections of Northern nobles a possibility he therefore sent a large army to counter the potential threat. With the battle of stoke won by Henry he was able to punish Simnel relatively lightly as the main leaders Lincoln, Schwarz, Broughton and Thomas Geraldine no longer posed a threat as they were killed in battle. Henry had realised Simnel was merely a pawn in the hands of ambitious men. Henry's attitude to Simnel as a threat can be seen in the way he was treated after the battle. Simnel was given the job of a turn spit in Henry's court and later falconry. Henry therefore perceived they're to be very little threat at all or Simnel would have been executed. In the autumn of 1491 Perkin Warbeck arrived in Cork claiming to be Richard Duke of York whose murder was assumed. Warbeck had the support of Charles VIII who had welcomed him into his court and Margaret of Burgundy. ...read more.

Warbeck was kept in mild captivity but after he escaped and was re-captured, Henry decided to have him executed. A contributing factor in this was the arranged marriage between Prince Arthur and Catherine of Aragon. Ferdinand and Isabella were reluctant to send their daughter to England while pretenders threatened the Tudor dynasty. Although Warbeck posed little threat therefore, it was important that as a potential threat he was removed. The threat to Henry overall from Simnel and Warbeck was mainly increased due to their entanglement with foreign powers and subsequently the fear of invasion they created. Overall Warbeck showed the greater threat on paper the support he gained meant that he could muster a more successful force to aid him in an invasion of England. At the time though his support was unable to provide the resources to enable an invasion. Henry viewed his support as a great threat and he was willing to risk economic security. Simnel was able to gather a military force with the support of various leaders. Militarily he posed much greater threat to Henry than Warbeck did, as he succeeded in gathering an army and bringing it into battle against Henry. ...read more.