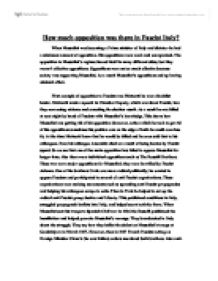 How much opposition was there in Fascist Italy?

How much opposition was there in Fascist Italy? When Mussolini was becoming a Prime minister of Italy and dictator he had a minimum amount of opposition. His oppositions were weak and unorganized. The opposition to Mussolini's regime showed itself in many different sides, but they weren't effective oppositions. Oppositions were not so much effective because society was supporting Mussolini. As a result Mussolini's oppositions end up having minimal effect. First example of opposition to Fascists was Matteotti he was a Socialist leader. Matteotti made a speech in Chamber Deputy, which was about Fascist, how they were using violence and canceling the election result. As a result he was killed at next night by hand of Fascists with Mussolini's knowledge. ...read more.

These organizations were making movements such as spreading anti-Fascist propagandas and helping his colleagues escape to exile. Then in Paris he helped to set up the radical anti-Fascist group Justice and Liberty. This publicized conditions in Italy, smuggled propaganda leaflets into Italy, and helped secret activity there. When Mussolini sent his troops to Spanish Civil war in 1936 the Rosselli publicized the humiliation and helped provoke Mussolini's revenge. They broadcasted to Italy about the struggle. They say how they inflict the defeat on Mussolini's troops at Guadalajara in March 1937. However, then in 1937 French Fascists acting on Foreign Minister Ciano's (he was Italian) orders murdered both brothers. ...read more.

This organization remains a major problem for Italian governments seeking to reform the South. Mussolini had had to take on the Mafia because he could not tolerate competition for the control of violence. Overall the fascist regime largely attacked the outward manifestation of the Mafia. In my conclusion I come out that Mussolini's opposition was very weak and some of them really useless, which means that they couldn't harm Fascism. As two historians say that organizations had little support from society because most people were doing what Mussolini said to do and then just go home and live s always without thinking about anything else. This means that there was Mass Apathy. Historian Clark said '...the real reason for anti-Fascist's failure was that the Fascist regime seemed tolerable and was even popular...' This tells that anti-Fascist was useless, and couldn't harm Mussolini's regime. ...read more.