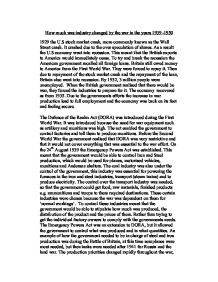 How much was industry changed by the war in the years 1939-1950 1929 the U.S stock market crash, more commonly known as the Wall Street crash. It crashed due to the over speculation of shares. As a result the U.S economy went into recession. This meant that the British exports to America would immediately cease. To try and break the recession the American government recalled all foreign loans. Britain still owed money to America from the First World War. They were forced to repay it. Then due to repayment of the stock market crash and the repayment of the loan, Britain also went into recession. By 1932, 3 million people were unemployed. When the British government realised that there would be war, they forced the industries to prepare for it. The economy recovered as from 1935. Due to the governments efforts the increase in war production lead to full employment and the economy was back on its feet and feeling secure. The Defence of the Realm Act (DORA) was introduced during the First World War. It was introduced because the need for war equipment such as artillery and munitions was high. The act enabled the government to control factories and tell them to produce munitions. Before the Second World War the government realised that DORA was very restrictive and that it would not cover everything that was essential to the war effort. On the 24th August 1939 the Emergency Powers Act was established. This meant that the government would be able to control Iron and Steel production, which would be used for planes, motorised vehicles, munitions and Anderson shelters. ...read more.

If the industries had not modernised then they would have fallen behind, giving the enemy the upper hand. The development of heavy bombers during the war would have a more peaceful role. Their design would be used as airliners for travel purposes; people would be able to travel anywhere in the world faster than ever before. For the production of planes to be so efficient new ways of mass production were used such as production lines. Where there would be many people making one product, they would split up the construction process into smaller tasks so that on whole the product would be made faster. Due to the great need to know when the German bombers were coming, radar was invented, aeroplanes would know exactly where they were and where the enemy was. Chemical advances were also made, the discovery of Nylon saved hundreds of lives when used as parachute material, since it was so much stronger than silk which rips easily. Nylon was also a lot cheaper to produce that silk. The world's first computer, Colossus, was held in an entire house in Buckinghamshire. It could not store any information, but what it did was to make thousands of rapid calculations to crack the enemies codes. Artificial fertilisers became in wider use enabling more food to be produced per acre that was desperately needed in Britain. Breakthroughs in medicine lead to new antibiotics and penicillin. Without these many of men would have died some of a simple infection. The medicines helped saved thousands of lives and continue to today. ...read more.

Only by forcing the British people to through a period of austerity was it achievable. The changes in industry were wide ranging. In such industries as steel and iron many improvements were done because they were greatly needed during the war and after it. Other industries such as the cotton and textile industries did not come on in the same ways. These industries had a bad time during the war and after it. There were other countries such as Japan and India that were making cloth that was far cheaper than British product. This was because they could afford to pay there workers low wages where in Britain they could not. The war was the main factor in the modernisation of many industries. All essential industries that fed the war need had great pressure to come with better and cheaper ways of producing their goods. The industries which dealt in luxuries, textiles, were in a bad way. Due to the export drive they could not sell anything to the public, and what they could make was always more expensive than foreign products. The government needed the most up-to-date technologies to win the war; they gave money to industries to improve themselves. The war encouraged growth and modernisation to the extent that most industries were greatly improved upon. The effects were long lasting, they gave the bases for many things we have in today's society. The nationalisation lasted many years, some of the industries have been returned to the private sector but some are still public, such as the NHS and the education board. Without the improvements made during the war we have a world that would be totally different and still backward. ...read more.